Cannabis sector to be in focus during U.S. election

Expect a whole lot more innovation in the pot space if the U.S. election result opens the door to federal legalization

The results of Tuesday’s U.S. election are expected to outline whether a pathway toward the federal legalization of cannabis will be possible over the next four years.

While legalization - at least on the federal level - is expected to take some time to play out, one potential development that could emerge is the possibility for academics and pharmaceutical companies to research cannabis.

That's something that isn't actively possible given the country's federal control over the drug. As a result, only a handful of universities can currently research cannabis, including the University of Minnesota, University of California-Los Angeles, and Temple University.

"In a legalized world, I think you're going to see every university, every researcher who does any biology, plant-based or botanical work, trying to do something with cannabis," he said in an interview with BNN Bloomberg.

"[Pharmaceutical companies] are just going to be messing with the plant all the time. I don't know how that doesn't lead to innovations or new products."

Baruchowitz's main argument stems from the fact that while it’s known that cannabis can assist with a variety of medical ailments, there's still a vast amount of untapped potential in the 110-odd cannabinoids present within the plant. At some point, he says one of those chemical compounds will be discovered to provide some sort of tangible benefit that no one has thought of yet.

"Maybe it's going to be something like ibuprofen connected with cannabis or CBD that could be proven to be more effective," he said.

"We don't know yet, but the point is, it's worth a lot when someone figures out."

There is already a rush to develop certain cannabinoids through various biosynthetic methods that use yeast, bacteria, or algae to grow specific cannabis compounds rather than extracting them from a plant. Raymond James analysts expect the global market for products derived by cannabinoid biosynthesis to grow to $10 billion by 2025.

At some point, these synthesized molecules will be incorporated into innovations, creating valuable new revenue streams for cannabis companies willing to do the work.

For a closer look at how the cannabis sector will be impacted by the U.S. election, check out this BNN Bloomberg feature.

THIS WEEK'S TOP STORIES
Cannabis contributed more than $8.6B to Canada's economy in August: StatsCan

Canada's cannabis industry contributed roughly $8.63 billion to the country's economy in August, a slight dip from the prior month on a seasonally-adjusted basis, according to Statistics Canada. That monthly figure is a 6-per-cent increase from last August, StatsCan data shows. The legal market's contribution to GDP rose by about 25 per cent in that same span. The illicit market represented $3.83 billion or about 44 per cent of the pot industry's contribution to Canada's economy.

Hexo Corp. reported fourth-quarter results late Thursday with revenue up 22.6 per cent over the prior three-month period, while the pot producer booked $89 million in asset write-downs and inventory write-downs. Hexo said it made $26.5 million in sales in it Q4, $2 million of which came from the company's burgeoning cannabis-infused beverage business that it co-manages with Molson Coors Beverage Co. Hexo's adjusted EBITDA came in at a $3.3 million loss, which was better than the $4.8-million loss analysts were expecting. The company said it expects to report positive adjusted EBITDA in its next two fiscal quarters. Hexo also said it plans to consolidate its shares on an 8:1 basis in order to remain compliant with NYSE listing regulations.

Shares of Aurora Cannabis tumbled by about 14 per cent over the past week after the Edmonton-based cannabis producer announced a US$500 million shelf prospectus that the company plans to use for "continued financial flexibility." The prospectus comes after Aurora said it completed its previously filed at-the-market equity issuance program. Jefferies analyst Owen Bennett said in a note to clients that the prospectus should ensure Aurora has enough cash to continue investing behind its top line for its Canadian operations while also looking at potentially expanding its presence in the U.S. Aurora also provided additional preliminary quarterly sales figures for its upcoming Q1 results, predicting revenue at the high end of the $60 million-to-$64 million range.

Early New Zealand cannabis vote results shows opposition to legalization ahead in referendum
It doesn't look like New Zealand will be the next developed nation to legalize recreational cannabis following preliminary referendum results disclosed this week. Early results show that 53 per cent of the country voted against legalizing the drug for recreational use while 46 per cent voted in favour. There's still a small chance that the measure could pass once roughly 480,000 additional special votes are counted next week, although it would require a huge swing in favour of legalization. New Zealand-based economic research firm BERL Economics estimates that legalizing recreational cannabis would generate roughly US$1 billion in sales for the country.

Cantor Fitzgerald analyst Pablo Zuanic lowered his 12-month target on Aurora to $7 a share (from $18) and reduced his rating to "neutral" (from "overweight") after the cannabis producer announced its US$500 million shelf prospectus. Zuanic cited the following as key factors weighing on the firm's call on Aurora's stock: Continued write-offs, reliance on the value end of the flower segment amid increased competition, the growing concern that a portfolio pivot may take quite some time, Nelson Peltz’s exit from the company, the somewhat-unexpected full utilization of the equity facility, and the shelf prospectus filing pointing to further dilution.

"We realize this downgrade is well after the fact. A slew of bad news over the past few months have pushed the stock from $23 in late May (remember that short-lived rally, when the stock tripled?) to $5.79 as of [Oct. 26]." - Pable Zuanic

For more stock info and news on Aurora, click here.

CANNABIS SPOT PRICE: $5.96 per gram -- This week's price is up 0.6 per cent from the prior week, according to the Cannabis Benchmark’s Canada Cannabis Spot Index. This equates to US$2,041 per pound at current exchange rates. 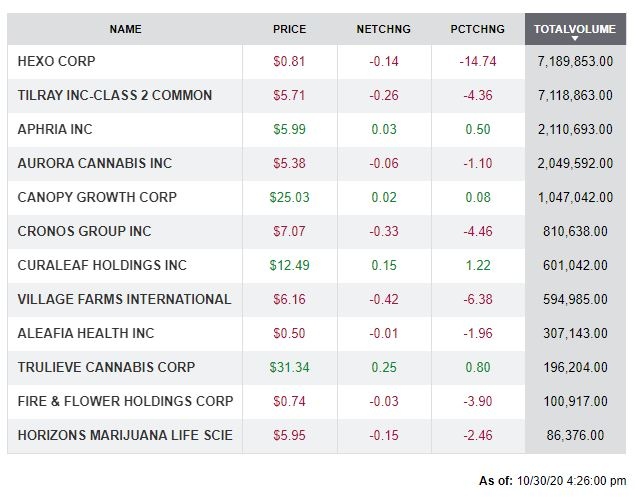