It was about time Aphria Inc. swung for the fences.

After largely sitting on the sidelines as analysts and investors alike wondered when the Leamington, Ont.-based company would find a way to enter the U.S. market, Aphria announced it would buy a U.S. craft brewer for about US$300 million.

The deal was the result of about 14 months of negotiations between Aphria and Atlanta-based SweetWater Brewing that ultimately led to this week's announcement, said the Aphria chief financial officer Carl Merton.

"We really started the journey on U.S. investment very quickly after [Irwin Simon] was announced as our as our interim CEO [in early 2019]," Merton told BNN Bloomberg in an interview.

"At one point, we had a deal that I thought was really attractive in the tobacco distribution space. We were very interested in that but ultimately decided to back away because we were concerned about the message that it would portray."

SweetWater, however, ticked a lot of boxes for Merton. The company was already generating cash and was profitable - last year the brewer made about US$66 million in revenue and reported $22 million in positive earnings before interest, taxes, depreciation, and amortization (EBITDA) - but would also provide a cult-like customer base who was already predisposed to cannabis through SweetWater's pot-friendly beer brands.

"Our focus on profitability is is very strong and pervades everything we do. So we didn't just blindly jump into diligence. We did a lot of heavy lifting on the deal itself before we started engaging advisors," Merton said.

Analysts have largely reacted positively to the deal. BMO Capital Markets cannabis analyst Tamy Chen said SweetWater appears to be a solid operator but noted that investors will be focused on how effective the brewer will be in advancing Aphria's core cannabis business in the U.S.

That doesn't appear to bother Merton right now. He said brand recognition, especially in the cannabis sector, should take as long as three years to resonate with consumers - plenty of time to get acquainted with the U.S. market and likely the same amount of time needed for cannabis itself to be federally legalized, according to some analysts.

"When you build that relationship with the consumer in advance, you almost pre-seed the market," he said.

However, consumers may not want to hold their breath for Aphria to begin offering cannabis-infused beverages to either the American or Canadian markets.

While that might be a natural course of action after buying an established brewer, the pot drink market has still failed to spark significant sales on either side of the border and Aphria appears willing to wait for the space to play out.

"It's always good to expand your offerings, but you have to do it in a measured way," Merton said. "There's potential, but that potential really cannot be realized until the distribution side of cannabis changes. If you can only buy this at a cannabis store and there's never ever changes, I don't think that beverage market grows."

Clearly the biggest story of the week was the U.S. election and how some state-wide ballots led to a green wave of legalization across five states. Montana, South Dakota, New Jersey, Mississippi and Arizona all legalized cannabis for either recreational or medicinal usage following Tuesday's vote. However a fully pathway toward federal legalization remains murky given the uncertainty on who controls the U.S. Senate with two Georgia seats appear to be set for a runoff in January. That would likely limit the likelihood that Canadian cannabis producers will be able to set up operations south of the border, while seeing some U.S. multi-state operators that already operate in those now-legal state benefitting from the recent election results.

Aphria is finally making its way to the U.S., care of a major craft brewer. The Canadian cannabis producer is buying SweetWater Brewing for US$300 million in a cash-and-stock deal that the company is financing through a mix of its existing cash and some debt. The deal will give Aphria exposure to the U.S. consumer market where it will be able to introduce some of its Canadian brands as new beers to acclimatize potential future buyers of the company's cannabis products once they can legally do so. During a conference call with analysts, Aphria CEO Irwin Simon added that the company with the SweetWater team to develop THC beverages for the Canadian recreational cannabis market.

Ontario's cannabis business is set to book an $80 million profit this fiscal year, according to the province's budget released on Thursday. The provincial government also said it expects the Ontario Cannabis Store, a Crown Corporation wholly owned by the province, to book an $170 million profit next year as more retail stores open up in Ontario. Ontario also said it expects to receive $145 million in federal excise tax payments from Ottawa this year, a figure that should expand to $255 million in the next fiscal year.

Cowen & Co. analyst Vivien Azer trimmed the firm's revenue forecast for Cronos following the Canadian cannabis producer's disappointing third-quarter results earlier this week. Azer said that Cronos' nascent  U.S. CBD segment continues to struggle amid COVID-19 as much of its brick-and-mortar retail network remains closed. The company's Canadian business is also under pressure from declining retail prices as it continues to lag among its peers who had previously lowered their pricing and introduced large format flower options, Azer added.

"We anticipate that its large cash balance is increasingly likely to fund its existing operations, rather than a near-term build out for U.S. THC. - Vivien Azer

For more stock info and news on Cronos, click here.

CANNABIS SPOT PRICE: $5.91 per gram -- This week's price is down 0.7 per cent from the prior week, according to the Cannabis Benchmark’s Canada Cannabis Spot Index. This equates to US$2,036 per pound at current exchange rates. 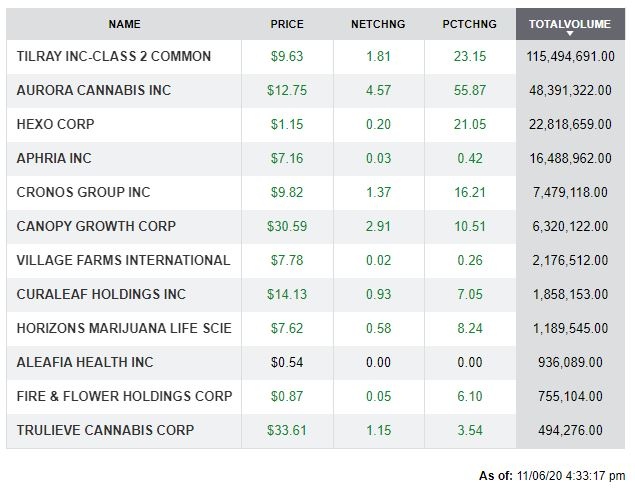