While Canadians scale back in Europe, Curaleaf finds right moment to invest in the continent

As Canadian cannabis companies retreat from establishing a stranglehold on the European market, Curaleaf Holdings Inc. Founder and Executive Chairman Boris Jordan is happy to pick up where they left off.

The head of the biggest cannabis company in the U.S. announced the firm's first international foray with the acquisition of European cannabis distributor EMMAC Life Sciences for US$285 million, a clear shot across the bow to the company's Canadian competitors who have spent years establishing a beachhead presence on the continent.

While the European market is still in its infancy, it holds significant potential for major cannabis firms eyeing new areas for growth. Prohibition Partners sees the market growing to about US$2.5 billion in 2024 from a scant US$300 million last year, with recreational sales accounting for just 10 per cent so far. 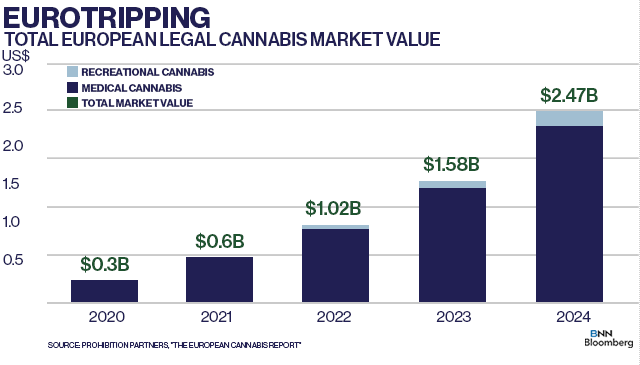 But Jordan thinks the European market could be as big as the U.S. in a matter of years, which is why he waited for the right time before investing in one of the its leading medical cannabis players.

"This is no criticism of and Canadian companies. I know they were hampered by not being able to get into the U.S. and so they were looking for anywhere to go outside of Canada in order to grow," Jordan said in a phone interview.

"So they went to Europe because Europe was making noises about getting into legalizing cannabis. But timing is incredibly important and I think they were too early."

As capital flooded into the Canadian cannabis space, companies like Canopy Growth Corp. and Aurora Cannabis Inc. spent millions establishing offices and production facilities across Europe. But lawmakers failed to move quickly and optimism that the market would take off faded, leaving Canadian operators to shutter or scale back their European businesses, including Canopy's announcement earlier this week that it plans to close its Danish facility.

Most companies, including Tilray Inc., Flowr Corp., and now Curaleaf, have flocked to Portugal, which has optimal temperatures to grow cannabis outdoors and a government that has established a friendly medical cannabis program.

"It's the best agricultural climate for cannabis and you can grow it for cheap," Jordan said. "I don't understand why Aurora and Canopy and all these companies built these immensely expensive indoor greenhouse and indoor facilities in Northern Europe. It baffles me a little bit, but it is what it is."

Jordan said his team was looking at the EMMAC asset for about a year before striking the deal to acquire it. He noted that he doesn't expect the company to deliver any material revenue until 2023, and is happy to wait five years until the European market is better established.

"We said: 'Where's the growth going to come from as the U.S. starts to get more penetrated?' Growth rates will fall from triple-digits to double-digits which is still very good, but nonetheless I wanted to see where the next frontier for growth is," Jordan said.

"I basically doubled the size of my potential market for less than two per cent of my market cap. I don't know what industry in the world you can do that."

Health Canada probes allegation of mislabelled cannabis products following complaint made against Canopy Growth
Health Canada stated it is investigating allegations of inaccurate cannabis potency levels. The complaint, submitted by Village Farms International's Pure Sunfarms, identified that Canopy’s TWD brand displays a flat 20-per-cent tetrahydrocannabinol (THC) potency for 18 separate batches of its cannabis products. Pure Sunfarms said in its complaint that the statistical likelihood of those cannabis products yielding the precise potency level was "extremely low." For its part, Canopy Growth said it complies with Health Canada’s labelling requirements and that its potency labelling represents the "midpoint of a narrow range of historical test results."

Canopy Growth to lay off 75, plans to shut down Danish facility, as strategic review comes to an end
Canopy Growth continued to shed staff as the company's year-long strategic review nears its end. Canopy told BNN Bloomberg that it has let go about 75 staffers, most of which were at its headquarters in Smiths Falls, Ont. The company has also submitted a proposal to Danish authorities to shut down its production facility in the country. If the facility closes, the move will impact another 60 people.  One prominent member of Canopy’s European team has already moved on. Jens Markussen, who ran Canopy's Danish operations, joined the country’s DanCann Pharma as its head of production.

Curaleaf on pace to sell US$1.2B in cannabis this year, sees uplisting to major exchange in future: Exec Chair
Curaleaf Holdings made a big splash earlier this week after reporting a 186-per-cent rise in managed revenue in the fourth quarter to US$233 million. The company also said it expects to generate at least US$1.2 billion in sales in the next fiscal year. Curaleaf announced its initial foray into the European market on Tuesday with the purchase of distributor EMMAC Life Sciences. In an interview with BNN Bloomberg, Boris Jordan said he expects U.S. publicly traded cannabis companies to be able to uplist their shares to major stock exchanges once the U.S. passes marijuana banking reform legislation sometime this year.

Organigram strikes deal with Big Tobacco as BAT takes stake in pot producer
While investors may be increasingly looking south of the border for opportunities in the cannabis space, don't count Canada out just yet. Organigram Holdings found a new partner with British American Tobacco taking a 19.9 per cent stake in the company for $221 million. The deal will also see the two companies develop a new research and development centre in Moncton, N.B. that will look to create new cannabis-focused products, with an initial look at CBD. BAT is the third tobacco company to invest in a Canadian cannabis producer with Altria taking a sizable stake in Cronos Group for US$1.8 billion, and Imperial Brands tying up with Auxly Cannabis. Organigram CEO Greg Engle told BNN Bloomberg that he thinks the deal will be a game-changer for the cannabis producer.

Analyst Call of the Week - Supreme Cannabis
Analyst Tamy Chen said BMO Capital Markets has established a new framework to help guide its cannabis coverage. The new methodology takes into account a company's improving profitability and key strategic attributes. As a result, BMO is upgrading its rating on Supreme Cannabis to an "outperform" and giving it a 12-month target price of $0.55 per share. BMO simultaneously downgraded Organigram to "underperform" and left its $2 target unchanged as the company has been unable to grow its recreational sales over the past several quarters. Sundial Growers was also downgraded to "underperform" but BMO boosted its target price by a dime to US$0.40 per share.  ​

For more on Supreme Cannabis, click here.
CANNABIS SPOT PRICE: $5.84 per gram -- This week's price is down 1.4 per cent from the prior week, according to the Cannabis Benchmark’s Canada Cannabis Spot Index. This equates to US$2,102 per pound at current exchange rates.