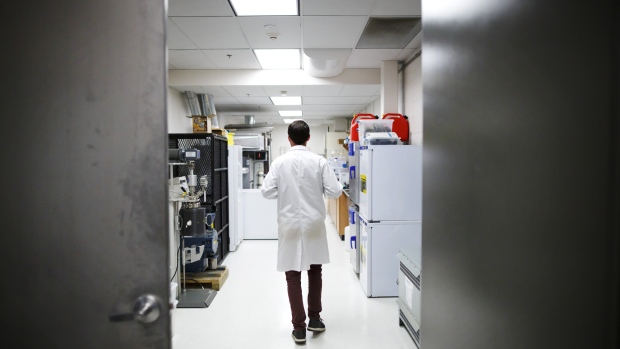 A lab technician walks through the Province Brands of Canada laboratory in Belleville, Ontario, Canada, on Friday, Aug. 31, 2018. Instead of infusing a drink with cannabinoids like THC or CBD, then masking the oily, bitter concoction with sugar as many beverage makers do in the U.S., Province Brands is developing beer brewed directly from the cannabis plant. , Bloomberg

They may account for just one per cent of the U.S. market, but Truss - the pot-drink joint venture between Hexo and Molson Coors - thinks the opportunity is much, much bigger than that. Bloomberg reports that Truss CEO Brett Vye expects cannabis-infused beverages will make up 20 per cent to 30 per cent of the Canadian pot market. The company is poised to lead the category as well, and has developed a portfolio of several different types of beverages that will be ready for Canada’s edibles debut on Dec. 16. Vye said Truss has formulated products that kick in within 15 minutes and wear off in about two hours and that the company is working with Molson Coors “to ensure we get the taste right.”

There’s a lot of cannabis still sloshing around Canada. Health Canada released its April figures for cannabis sales and inventory levels late Tuesday, showing that the amount of unfinished pot rose in April, potentially accentuating the risk of a potentially-worthless glut of unsold legal marijuana in Canada. The total inventory of finished and unfinished dried cannabis held by cultivators, processors, distributors and retailers stood at 215,665 kilograms in April. A BMO Capital Markets report last week suggested that the growing amount of unfinished inventory stuck in Canadian licensed cannabis producers’ vaults may lead to industry-wide writedowns. Meanwhile, sales of legal cannabis in Canada surged in April, likely due to an increased amount of retail stores opening in Ontario and Alberta during the month.

Canopy Growth is buying a cannabis extraction company. The Smiths Falls, Ont.-based firm announced on Wednesday the company has acquired Saskatoon-based bio-product extractor KeyLeaf Life Sciences. Terms of the deal were not disclosed. Canopy Growth assumed control of KeyLeaf for accounting purposes in November 2018 and its results were consolidated in its financial statements for the 2019 fiscal year. KeyLeaf will enhance Canopy Growth’s extraction capability in Canada as well as provide it with an extraction-related facility in the United States to support its stateside CBD expansion plans. Once its Canadian facility is fully operational, KeyLeaf will be able to process 5,000 kilograms of input materials daily.

B.C. grey market pot growers could yield $3B in sales if portion was legally licensed: report

Shifting a portion of British Columbia’s grey market cannabis growers to the legal market could spell billions of dollars of sales, according to a report released on Tuesday. Cannabis firm Grow Tech Labs said if just 15 per cent of the 6,000-odd grey market craft cannabis growers were to receive a micro-cultivation licence from Health Canada, that would generate $2.9 billion in sales and $47 million in taxes for provincial and federal governments. The Vancouver Sun reports that growers working in the unregulated market often have difficulty legitimizing themselves due to costs associated with entering the legal market and the tight limits on capacity. Grow Tech is organizing a co-op so small producers in B.C. can pool their resources and bring more product to market with economies of scale, the newspaper says.

First cannabis came for your pets, now it’s coming for your horses. “Created for horse people, by horse people,” Cannahorse, the first legal cannabis brand dedicated to horse health, was launched on Wednesday. The brand is hoping for first-mover advantage in the medical equine space with four product lines aimed at treating various conditions. The company said in a release it’s in discussions with unspecified horse-related regulators to allow cannabis to be an option for equine medical needs. It also has access to a large number of horses and two testing facilities exclusively for performance tests and clinical trials.

3.8%
-- The amount of the global population aged 15-to-64 years that used cannabis at least once in 2017, the equivalent of some 188 million people, according to the United Nations Office of Drugs and Crime in its annual World Drug Report released on Wednesday. Cannabis continues to be the most widely used drug, the report found. 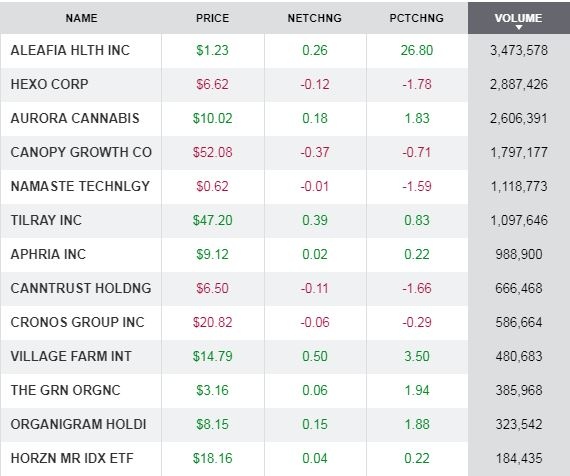