Final regulations for cannabis edibles, extracts and topicals out with no major changes, set for launch by mid-December

The final rules for how Canada will regulate cannabis edibles, extracts and topicals are out – and there’s not much change from what was first announced last year. The highly-anticipated regulations were released on Friday and will come into force on Oct. 17. The government said it expects a “limited selection of products” will be available for sale in Canada by mid-December. Many previous regulations proposed will remain including the cap of THC in the edibles and extract products, although there are new provisions prohibiting any association of cannabis products with tobacco or alcohol products as well as how cannabis can be advertised or promoted.

Canada's rollout of legalizing recreational cannabis has been met with “some challenges in the supply chain,” admits Bill Blair, the minister in charge for enforcing Ottawa’s cannabis policy, in an exclusive interview with BNN Bloomberg’s David George-Cosh. “I've read a number of entrepreneurs are concerned they thought they could have made a lot more money quicker,” Blair said. He added that the government could re-evaluate some of the regulations in the future if the industry evolves and consumer tastes change. For now, he noted the policy is being enforced with an “appropriate abundance of caution.”

More shake-ups are happening at Tilt Holdings. The company announced at its annual general meeting on Thursday that chair Alex Coleman no longer sits on Tilt’s board of directors. It’s the second time in six weeks Coleman stepped away from a role with the company after serving as Tilt’s CEO until early May. He resigned from that role after the U.S.-based Tilt wrote down nearly US$500 million worth of goodwill in its fourth-quarter results. The write off was related to its reverse takeover of Canada’s Sante Veritas Holdings. Coleman no longer has any leadership or governance role with Tilt Holdings while interim CEO Mark Scatterday will take over the board’s chair duties.

A key U.S. congressional committee is set to consider several cannabis amendments next week, according to Marijuana Moment. The House Rules Committee will weigh 12 amendments to the appropriations bill to fund the government for the 2020 fiscal year. They cover a wide range of issues. Some highlights include the Justice Department’s jurisdiction over state legal marijuana programs, a pathway for incorporating CBD into the food supply, and shifting Drug Enforcement Administration funds to substance abuse education programs. The amendments were submitted by congressional representatives from both parties. The committee will decide next week which of the amendments will make it to the House floor for voting.

The city of Pasadena, Calif., is in the midst of taking cannabis retail applications, but one of the area’s highest-ranked potential retailers – and the subsidiary of a Canadian company - is embroiled in scandal. MedMen Pasadena Retail LLC, whose parent is B.C.-based MedMen Enterprises, disclosed a lawsuit by a former employee alleging racial and sexual discrimination by the company’s CEO. The company’s former CFO alleges the MedMen’s environment was “miserable and intolerable” and “replete with racial, homophobic and misogynistic epithets.” The city is now increasing scrutiny over the company and threatening to revoke its application. MedMen says it is defending itself “vigorously” in court

$7.24
-- The price of a gram of cannabis in Canada, up 6.2 per cent from the prior week, according to the Cannabis Benchmark’s Canada Cannabis Spot Index. This equates to US$2,466 per pound at current exchange rates. 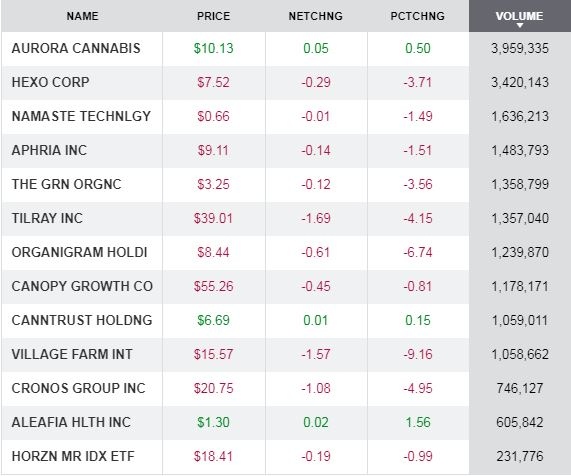