Bruce Linton 'not bitter' about abrupt ouster at Canopy Growth

In surprise move, Bruce Linton terminated by Canopy Growth as CEO and chairman

Bruce Linton is no longer the co-chief executive officer at Canopy Growth. In a surprise decision by Canopy’s board on Wednesday, Linton was terminated from his role as co-CEO of the world’s biggest cannabis producer. With Linton now gone, co-CEO Mark Zekulin will become the company’s sole boss. The board-level decision to remove Linton from the company he co-founded in 2013 comes days after Constellation Brands Inc. – which made a $5-billion investment in Canopy last August – expressed displeasure with the pot firm’s year-end results. Linton’s departure “likely creates near-term uncertainty with respect to the company’s leadership and direction,” one analyst said.  Linton told BNN Bloomberg in an interview that the job posting to find his replacement will prompt stiff competition. “I think the company’s in great shape. It’s just kind of a sad day for Bruce, because you don’t get here by working Monday-to-Thursday,” Linton said.

With Linton gone, the search is on to run the world’s biggest cannabis company

One big question remains after Linton’s exit from Canopy: Who is fit to step out of his shadow and satisfy the company’s largest shareholder? BNN Bloomberg’s David George-Cosh examines how the company’s new CEO will have to manage some lofty expectations, as long as that person gets the tacit approval from Constellation Brands. The alcohol giant will clearly have a significant say in who will be running the Smiths Falls, Ont.-based company in the future. Canopy’s next-generation leader will likely need to find immediate ways to rein in the company’s outsized losses back to a level that would make Constellation more comfortable with its investment. However, as one long-term cannabis investor puts it, Linton won’t be twiddling his thumbs for long: “I suspect you haven’t seen the last of Bruce Linton.”

There’ll soon be more bricks-and-mortar stores in Canada’s biggest cannabis market. BNN Bloomberg was first to report that Ontario will issue 50 new cannabis retail licences this year, a move aimed at expanding legal pot sales in the province while helping to stamp out the illicit industry. Ontario plans to issue 42 new licences for private-sector retailers to be part of a new lottery system. The remaining eight licences will be allocated for outlets in First Nations communities. Interested applicants will need to pre-qualify by meeting certain financial criteria to be part of a lottery process schedule to take place in late August. Cannabis sales in the province grew to $19.6 million in April when the first physical shops opened their doors, up from $7.6 million in the prior month, according to Statistics Canada.

CannTrust is revising its forecast for its planned outdoor cannabis cultivation plans. The Vaughan, Ont.-based company said it has yet to obtain Health Canada approval to plant and cultivate legal outdoor pot on the 81 acres of land it has acquired in British Columbia. That means that CannTrust is dialing back its estimated production to no more than 15,000 kilograms of cannabis from earlier forecasts of 75,000 kilograms. Furthermore, if CannTrust doesn’t get Health Canada approval by Aug. 5, the company said there will be no outdoor harvest in 2019.  CannTrust still is looking to add 160 acres in the near term through a long-term lease, giving the company production estimates between 100,000 kilograms to 200,000 kilograms of cannabis in 2020 – once it receives the necessary permits to begin growing its outdoor pot.

1 kilogram
-- The amount of pot that Canadian medical cannabis patient Alan Harris now has the right to possess after a Federal Court ruled that a regulatory 150-gram cap violates his constitutional rights. 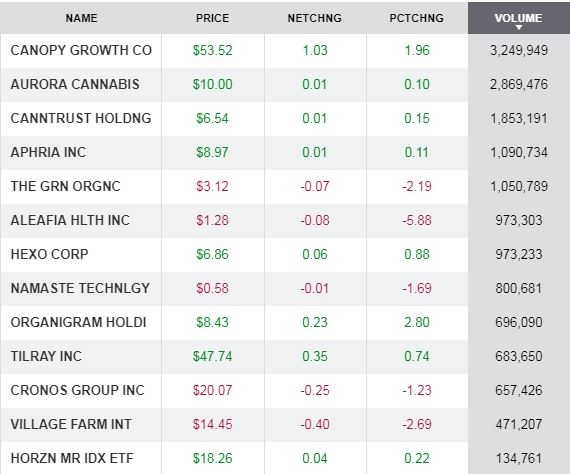