Canopy Growth’s interim boss sees a lot of potential for the cannabis giant in the launch of the next generation of cannabis products set to hit the market this year. Mark Zekulin, Canopy Growth’s interim CEO, told BNN Bloomberg on Thursday that the company has 50 different products in the pipeline that it is expected to hit the market as early as late December. “This is an exciting proposition and it’s a combination of our own cannabis intellectual property with the know-how from Constellation on building a bottling plant and market segmentation,” Zekulin told BNN Bloomberg’s Greg Bonnell. Zekulin added that the search for the company’s new CEO will be aimed at ensuring Canopy Growth’s future isn’t tied to just one person. “I do think we need to step back and recognize that this company is not about Bruce, it’s not about Mark. And as excited as we are about the new CEO, it’s not about that person either,” he said.

The Ontario Cannabis Store has a new CEO. Cal Bricker, formerly of the Ontario Lottery and Gaming Corporation, is taking over as interim president and chief executive officer from Patrick Ford, who said he plans to retire, the company said in a release. The OCS said in a statement that Bricker brings “extensive expertise in regulated industries, communications and consumer packaged goods” and begin his duties on Sept. 6 while a search for a permanent CEO will begin.

Global cannabis companies have spent more than US$2 million in lobbying for federal reform so far this year, according to MJBizDaily. The spending is led by trade group Cannabis Trade Federation as well as U.S. multi-state cannabis operators Curaleaf and Surterra, whose lobbying efforts focused on the SAFE Banking Act of 2019, STATES Act and RAISE Family Caregivers Act, according to data obtained by the nonprofit Center for Responsive Politics at OpenSecrets.org. Other major lobbying spending comes from the National Cannabis Industry Association, Canopy Growth and Trulieve.

WeedMD said it raised $12 million in a bought deal of convertible debenture units, increasing the amount of the financing from a previously-announced $10 million earlier in the week. The company said in a statement the proceeds will be used for “working capital and general corporate purposes.” WeedMD said Mackie Research Capital was the company’s lead underwriter and sole bookrunner for the deal. Each convertible debenture unit offered to investors consists of one 8.5 per cent unsecured convertible debenture and 625 common share purchase warrants of the company at an exercise price of $1.80. WeedMD closed trading on Thursday at $1.48 a share on the TSX-Venture, down 5% for the day. 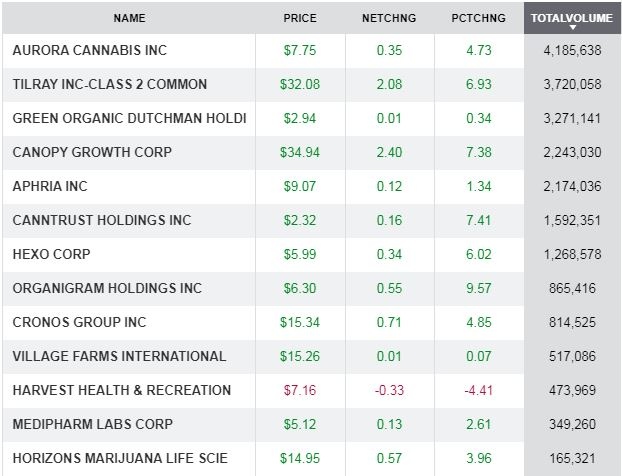