One of the biggest planned cannabis M&A deals is no more. Harvest Health & Recreation's US$850 million deal for Verano Holdings is not happening after the company's mututally agreed to end the transaction. Harvest said in a statement that the process of closing the deal – which was first announced in March, 2019 – was hindered by numerous delays, including getting regulatory approvals from state and municipal authorities to transfer licences and a dearth of available capital for the legal pot industry. Earlier this month, Harvest announced that its executive chairman Jason Vedadi, one of the key architects of the Verano deal, would step down from his role, with Harvest's CEO Steve White taking on his responsibilities.

Another Canadian cannabis company is pulling back its operations amid financial concerns brought forth from the COVID-19 pandemic. This time it's The Green Organic Dutchman which plans to postpone production at its facility in Valleyfield, Que., temporarily lay off staff and reduce salaries for both salaried workers and certain executives. A company spokesperson said that 30 staff in Quebec are affected by the announcement. TGOD said it spent $229 million building its Valleyfield facility before today's announcement. Jefferies LLP analyst Owen Bennett said TGOD's decision not to operate the facility is a "gross misallocation of capital" by the company's management.

Toronto-based cannabis producer WeedMD said it hired a new chief financial officer on Thursday, appointing Lincoln Greenidge to replace Nichola Thompson. Thompson, who is one of a handful of female C-level executives in the cannabis sector, will be formally stepping down at the end of April. Greenidge comes to WeedMD from a career in the mining sector, most recently at LSC Lithium. Elsewhere at WeedMD, company staff have been signing union cards with the United Food and Commercial Workers in a potential unionization effort, according to a report in The London Free Press. 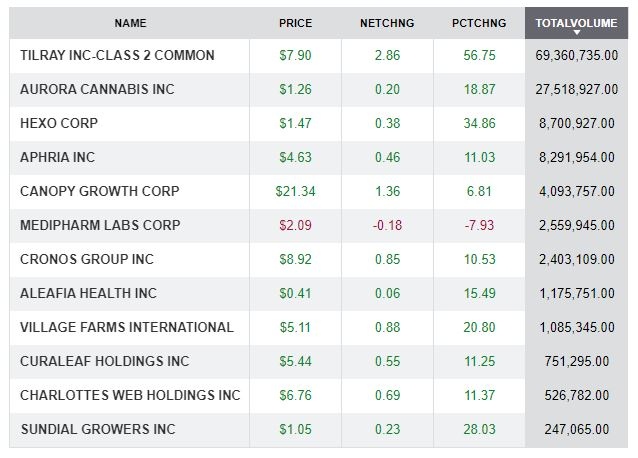