What to expect from U.S. cannabis earnings

Canada’s First Nations are engaging with the Canadian government to work out cannabis rules that would determine jurisdictional control as well as what kind of revenue-sharing would be developed between the two parties. The CBC reports that First Nations leaders are holding regular meetings that are exploring the possibility of a cannabis plan with Indigenous communities which could eventually require a legislative component to give it force. The regulatory regime would be First Nations-controlled — from the licensing to testing to traceability to revenue sharing, according to one First Nations leader. The CBC notes that Ottawa initially cut First Nations out of the government’s early cannabis legislation which gave provincial and territorial governments control over the distribution and retail end, while Health Canada oversees the licensing of commercial production.

Cannabis edibles and other so-called “next-generation” pot products will be legal on October 17, exactly a year after Canada legalized the sale and purchase of dried and fresh cannabis, oil, seeds and plants. The Canadian Press reports those edible products will likely be different to the chewy, colourful candies and gummies that are commonplace on the black market given Health Canada’s restrictions that cannabis not be seen as "appealing to young persons". That leaves the industry scratching their heads to come up with a product that would be popular with consumers, without being seen as too much fun. Cam Battley, the chief commercial officer for Aurora Cannabis Inc., notes there a "lack of clarity" on exactly what is permissible. Still, he said the Edmonton-based firm has a gummy game plan -- but would not go into specifics.

Looking to make your own cannabis gummies and don’t know where to start? One Canadian company wants to change that, offering new kits that can help cannabis consumers a do-it-yourself kit to make your own gummies at home. The Canadian Press reports those kits, called Zen Zingers, allow people to control the cannabinoid dosage and make gummies at a lower price at home in about 10 minutes, according to the CEO of Paracanna, which sells the product. The company’s product does not contain any cannabis, which makes it possible to sell and is not subject to Health Canada's rules on pot-infused edibles.

Months after former CEO Sean Dollinger was pushed out of his role at Namaste Technologies by the company’s board, the Toronto-based firm announced it has hired a full-time replacement. Meni Morim will be the company’s permanent CEO after taking the position in an interim basis back in February when Dollinger was abruptly ousted after the company completed an internal investigation that was prompted by a short seller’s allegations in October. Morim will also join Namaste’s board, the company said in a release.

The U.S. Drug Enforcement Agency is warming up to the legal cannabis market, stating on Monday in a release that it is expanding scientific and medical research for marijuana in the United States. The DEA said that the total number of individuals registered by DEA to conduct research with marijuana and cannabis by-products has increased by more than 40 per cent to 542 in this past January from 384 in 2017. The DEA signalled Monday it will process 33 applications with the goal of helping scientists develop "safe and effective drug products”, Bloomberg reports. The DEA added it has also more than doubled the production quota for cannabis each year based on increased usage projections for federally approved research projects. Think Progress reports that the announcement will pave the way for the robust clinical trials experts believe will force the government to ultimately legalize cannabis on a federal level.

US$54.8 million
-- The loss that Constellation Brands will book in its current quarter from its investment in Canopy Growth, according to Reuters. 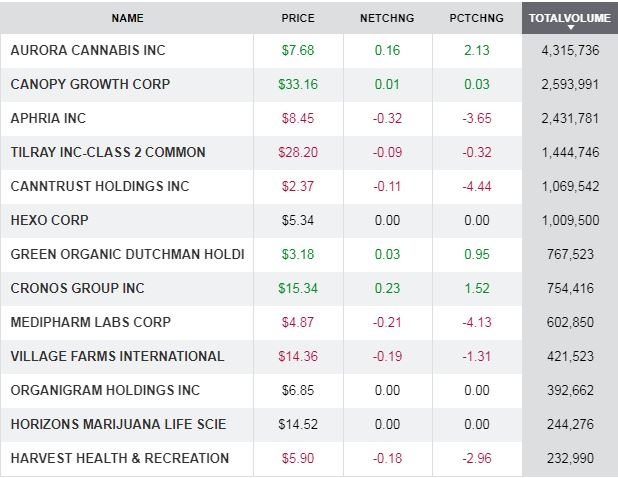