Curaleaf forecasts US$1B in sales for next fiscal year

Curaleaf Holdings expects big things with its U.S. cannabis business after reporting second-quarter financial results that beat analyst expectations. The company – which has operations in 11 U.S. states – issued guidance that it expects to deliver US$1 billion to US$1.2 billion in revenue in its next fiscal year, while adjusted EBITDA margins are forecast to be around 30 per cent. Those revenue targets rely on the closing of its planned acquisitions of Select and Grassroots – both of which are being scrutinized by U.S. Department of Justice antitrust officials. If successful, Curaleaf may emerge as the first cannabis company to post more than US$1 billion in sales. Some Canadian cannabis companies said they could generate similar annualized sales, but have dialed back those expectations in the wake of some logistical stumbles in the Canadian legal pot market.

Israel has given the green light to seven companies to start growing medical cannabis in the country, according to Calcalist, a website focused on the Israeli tech industry. The new growers are expected to triple the supply currently available in the Middle Eastern country and are expected to start supplying pharmacies by the end of the year, the website reported. New regulations have made it possible for patients to obtain their medical cannabis at more than 70 pharmacies in Israel – previously they were able to pick it up at a health center in Bat Yam. Prices for the medical cannabis products are expected to be capped at $280 for 120 grams.

A new survey shows that crime rates plunge in neighbourhoods once a cannabis store opens, according to Marijuana Moment. Adding a new pot shop leads to a reduction of 17 crimes per month per 10,000 residents, or about a 19 per cent decline in crime, the study published last week in Regional Science and Urban Economics found. Marijuana Moment said the researchers studied local monthly crime-related data between January 2013 to December 2016 in Denver, which legalized cannabis in 2014. Crime rates in Denver increased by 1.7 per cent in that time – except in neighborhoods that gained dispensaries.

Origin House, the trade name of CannaRoyalty Corp., reported second quarter financial results on Wednesday, posting a net loss of $34.9 million during the three-month period ending June 30. The company also reported Q2 revenue was $21.4 million, compared to $3.5 million from the same period a year earlier. Origin House attributed its net loss to non-operating factors, notably transaction costs attributed to its planned acquisition by Cresco Labs and two balance sheet adjustments related to the sale of AltMed and its acceleration of the 180 Smoke acquisition.

$19.5 million
-- The amount of cannabis sold in British Columbia – often referred to as the cannabis capital of Canada – in the first nine months of legalization in the country. The lower-than-normal amount is attributed to a lack of legal outlets to purchase cannabis. 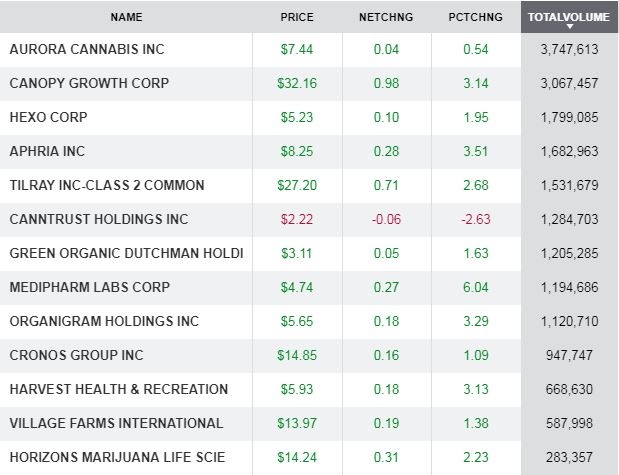