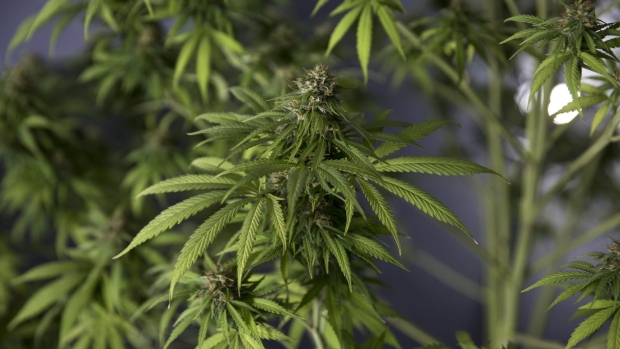 Cannabis plants on display at the Ganja Expo, organized by the Thai Health Ministry, in Buriram, Buriram province, Thailand, on Saturday, March 6, 2021. Thailand, which was one of the first countries in Asia to legalize medical marijuana in 2019, has further eased curbs on its use in textiles, herbal cosmetics and food products. Photographer: Luke Duggleby/Bloomberg , Bloomberg

It used to be common to see Tyler Rumi and his B.C. cannabis farm staff out watering their plants until the recent heat wave hit.

Now extreme temperatures have the co-founder and chief executive of Good Buds and his crew waking up under the cover of darkness to tend to their Salt Spring Island farm and wrap their shifts by 10 a.m.

“When we typically would water, early in the morning, by around 9 or 10 a.m. the water was evaporating right into the air because it was so hot out,” said Rumi.

Rumi's new 2 a.m. wake-up calls are part of a new process the company has implemented as it and other cannabis farms try to cope with rising temperatures that have blanketed several provinces and contributed to the deaths of hundreds of people in B.C.

Heat warnings have been in effect recently in B.C. and Alberta, large parts of Saskatchewan, Northwest Territories and a section of Yukon as temperatures reached 40 C in some areas.

Sixty temperature records were topped in B.C., including in the Village of Lytton, where an all-time Canadian high was beat when the mercury hit 49.5 C on Tuesday.

Wildfires also ensnared Lytton, resulting in an emergency evacuation order as much of the area was scorched this week.

Cannabis plants can deal with heat, but too much of it poses a threat to their health, while wildfires can level crops within seconds and wreak havoc on an already short growing season in Canada.

Rumi's been watching the thermometer closely and as soon as he noticed it creeping up, he had staff begin pulling out “water suckers,” weeds that snatch up water meant for the cannabis plans.

“It just gets too hot out there, so we go out and we do our weeding and different activities early in the morning before the peak heat arrives and then we go down to the ocean or down to the lake to enjoy the afternoon,” he said.

While the Good Buds farm is roughly six hours away from Lytton, Rumi is not taking any chances with his crop of small-batch and organic cannabis because wildfires not far from his property posed challenges last year.

Staff had to dawn masks because the air quality was so poor and they fretted about the plants because the wildfires were wiping out all the sun they need to grow.

“So that's something that's very much on our minds,” said Rumi. “It can become very detrimental.”