In a matter of months, white-hot cannabis companies have flamed out in spectacular fashion. Many have lost two-thirds or more of their value.

The pain deepened on Thursday, when Ontario-based Canopy Growth Corp. announced revenue that fell short of the lowest Wall Street estimate and a loss that one analyst called “astounding.” That sent shares to the lowest since December 2017. It’s still the largest pot company in the world, but at $7.1 billion its market value is just a sliver of the $24 billion it reached in April.

Cannabis stocks are starting to go up in smoke, stifled by thwarted legalization and dried-up financing pic.twitter.com/Kz4TbjdCs2

One day later, MedMen Enterprises Inc., one of the first U.S. cannabis companies to sell shares to the public, said it would dismiss 190 employees, including about 20 per cent of its corporate workforce, as it struggles to preserve a dwindling cash pile.

“The last industry chapter was defined by growth at all costs,” MedMen Chief Executive Officer Adam Bierman said in an interview. “Now we’re transitioning out of that chapter, and that transition is harsh and quick.”

It wasn’t that long ago that the cannabis industry was cruising. Big markets like Canada and California had legalized recreational use, while populous states such as New York and New Jersey were expected to follow suit. This had executives and analysts forecasting sales in the tens of billions of dollars within a few years, sending stocks to valuations that even some in the industry warned were too high. 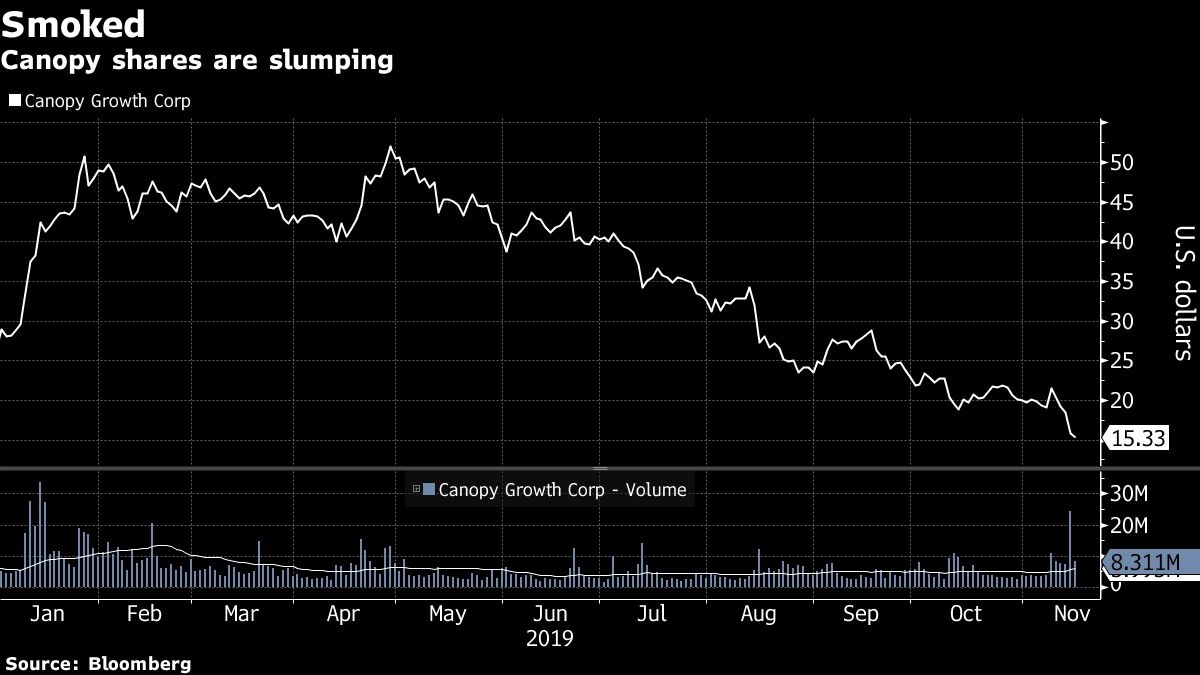 But legalization hasn’t been the trigger to invest that many expected. Canada’s biggest provinces have allowed few retail stores to open, while companies have struggled to develop the right mix of products. In California, the legal market has had to contend with high taxes and a well-established illicit market. Legalization efforts in other states have stalled.

Despite the obstacles, many remain optimistic that bullish benchmarks will be reached, though later than expected. Cowen Inc. analyst Vivien Azer recently boosted her U.S. sales outlook to $85 billion by 2030 from a previous forecast of $80 billion, while Canopy has said it’s still on track to turn a profit in three to five years.

For the first time, with stocks at such low levels, “there’s incredible pockets of value in the space,” said Justin Ort, chief investment officer for the Measure 8 Full Spectrum Fund, which invests in cannabis. “But the Street’s not willing to see it right now.”

What would get share buyers’ attention, Ort said, is legislative easing in the U.S., including passage of the SAFE Banking Act, which would pave the way for financial institutions to do business with cannabis companies and bring large institutional investors and U.S. capital markets into the fold.

But cannabis remains federally illegal in the U.S., meaning that shares are largely held by retail investors, who are less likely than institutional investors to remain patient in a downturn.

“In almost every other industry, people can make relative-value judgments,” Jeff Solomon, CEO of Cowen, said at his firm’s cannabis conference in Boston last week. “In this industry they’re like, ‘Well, it’s not really a matter of price, it’s a matter of whether or not I should even get involved.’”

“The capital markets have gone from frothy to completely closed,” MedMen’s Bierman said. “We’re now entering a stage where businesses are going to have to be self-sustaining.”