Canadians are buying a fraction of the legal recreational cannabis that the government projected, according to estimates suggesting that cheaper black market pot is proving irresistible for many consumers.

Canadian licensed cannabis producers are expected to sell approximately $1.1 billion worth of legal pot in the first full year of legalization, according to an analysis of retail sales data by Cannabis Benchmarks. Based on Statistics Canada’s crowdsourced price estimate of $10.23 per gram, that's the equivalent of selling 105,000 kilograms – a fraction of the 924,000 kilograms of dried flower equivalent Canadians are believed to consume each year.

“When the government was setting up the legal framework for cannabis, I don’t think they realized how many roadblocks would be set up in front of them,” said Het Shah, managing director of New Leaf Data Services, which owns Cannabis Benchmarks, in a phone interview.

“They likely thought the online sales would be robust enough to keep the black market away. That hasn’t happened yet.”

The persistence of the black market, coupled with a relatively sluggish rollout of physical bricks-and-mortar cannabis stores in Ontario, has led the cannabis industry to fall well short of analyst earnings expectations since recreational use became legal on Oct. 17, 2018. As of last week, 561 cannabis retail stores were operating across the country, led by Alberta and British Columbia, according to Cannabis Benchmarks. Meanwhile, a lottery system designed to ensure pot store licences were issued as fairly as possible has resulted in just 24 cannabis shops open in Ontario, the country’s most populous province.

“If you’re an experienced user, you probably have your suppliers already. It’s probably hard to switch away from them because prices [in the black market] are 30 to 35 per cent lower,” Shah said.

The average price of cannabis per gram in Canada’s legal market is $10.23, compared to an average of $5.59 found in the black market, according to third-quarter data published by StatsCan on Wednesday. That’s a price differential of 45 per cent, which has widened from a gap of about 35 per cent in the fourth quarter of last year, StatsCan data showed. 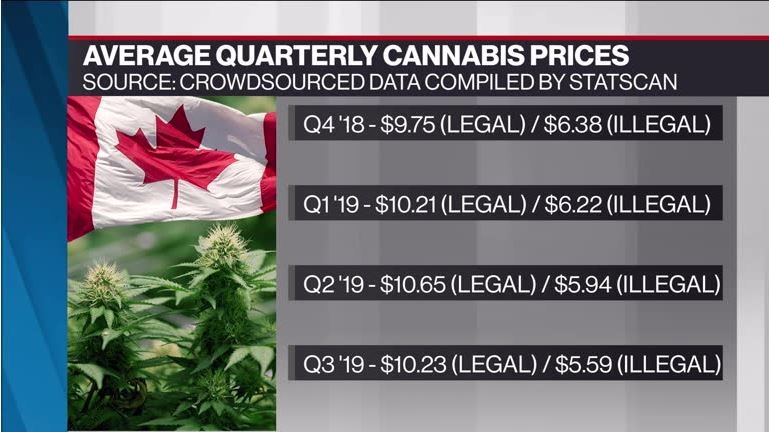 Meanwhile, cannabis producers are harvesting enough marijuana to come close to hitting Canada’s annual demand of 924,000 kilograms​, according to separate analysis by Shah and Craig Wiggins, managing director of The Cannalysts Inc., an independent cannabis research firm. As of July, monthly legal pot harvests are north of 62,600 kilograms and “increasing rapidly” to that annual target, Wiggins told BNN Bloomberg.

“Cannabis was just like a gold rush where everyone tried to put their capacity up as quickly as possible,” Wiggins said in a phone interview. “I don’t think people were able to take a step back and look at the numbers and realize they were making too much pot.”​

Shah and Wiggins now envision a scenario where dozens of cash-strapped cannabis producers file for bankruptcy or merge, while the black market will flourish for several years. Separately, BMO Capital Markets analyst Tamy Chen expects prices for legal dried flower cannabis to decline early next year as a result of a glut of unpopular product stuck at the wholesale level.

“Given the elevated inventory level currently held by provinces, which we have anecdotally heard is largely the ‘mid-range’ flower category, we believe provinces and retailers will likely implement price markdowns to accelerate product sell-through,” Chen wrote in a report to clients published Monday.

Wiggins believes the pot sector could take some cues from oil and gas producers and “leave some product in the ground” when supply overshoots demand and results in lower prices.

“Will we see facilities getting idled? It’s certainly a possibility, and it might not be by choice either,” Wiggins said.