Cannabis sector to be in focus during U.S. election

There may never be a more pivotal moment for the legal cannabis industry than Tuesday's U.S. elections.

Voters will help determine how the future of legal pot in the world's biggest market will fare: a vote for the Democrats signals a pathway to federal legalization, while a Republican win would likely maintain the status quo where marijuana will continue to be a controlled substance.

"If people thought Constellation Brands' investment into Canopy Growth was transformational for the sector, the U.S. election is going to make that deal look like the minor leagues," said Marc Lustig, who sits on the board of Cresco Labs, a Chicago-based multi-state operator, and former chief executive officer of Origin House.

The Democratic presidential ticket of Joe Biden and Kamala Harris has affirmed its commitment to decriminalize cannabis. If the Democrats wind up controlling the Senate and House of Representatives, then a clear pathway to full legalization emerges. 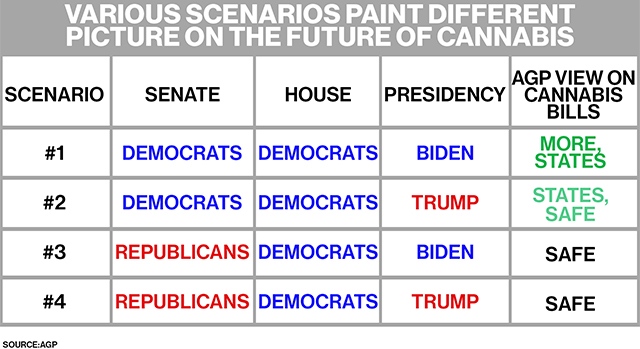 Cowen & Co. cannabis analyst Vivien Azer gives an 80 per cent chance the STATES Act – legislation that would allow states to regulate cannabis sales with no federal government involvement – would be passed within the next year if a Democrat sweep occurs. Other bills such as the Secure and Fair Enforcement (SAFE) Banking Act may also become law and would allow federally regulated banks to provide financial services such as loans or mortgages to cannabis operators.

"But let's be entirely clear about where cannabis falls in the list of Democratic priorities," Azer said in a phone interview. "It's not in the first hundred days, but we do think it is on the 'year one' agenda."

Passage of the STATES Act may also be needed to convince stock exchange operators such as the TMX Group Ltd. to allow its listed pot companies to operate in the U.S. cannabis market. Doing so would see the cluster of U.S. cannabis firms listed on Canadian markets increase their enterprise value by as much as US$9 billion, Azer said.

However, re-electing U.S. President Donald Trump would likely keep cannabis on the backburner, allowing states to continue to determine their own laws on medical and recreational marijuana legalization, while the drug remains federally illegal.

Five states – Arizona, New Jersey, Montana, South Dakota, and Mississippi – have either medical or recreational cannabis legalization on the 2020 ballot. If they all vote to legalize, and recent polls suggest that will happen, New Frontier Data estimates those states would add a combined US$3.3 billion in cannabis-related sales by 2025.

"When cannabis companies can change how they bank, that's when some investment can start to happen," Lustig said. "Right now, it's a 'fear of God'-type of thing that people think about the [Trump Administration] because of the consequences of wiring money across the U.S. for a cannabis business." 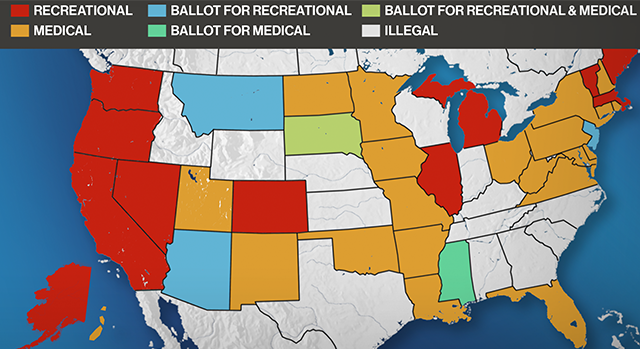 At the very least, analysts expect the U.S. elections to provide more clarity to institutional investors interested in spending billions of dollars on cannabis companies, but are sitting on the sidelines given the volatility of the sector in both the U.S. and Canada.

Graeme Kreindler, a cannabis analyst at Eight Capital, noted that aside from Constellation Brands Inc. and Altria Group Inc., major cornerstone institutional investors have been absent in the cannabis sector.

Depending on how the U.S. elections pan out, that could change.

"It's these sorts of regulatory events and what could happen out of the election that has the potential to change the framework and allow more capital to flow into the sector," Kreindler said. He added that significant institutional support would go a long way to calming some of the volatile swings often seen in cannabis stocks.