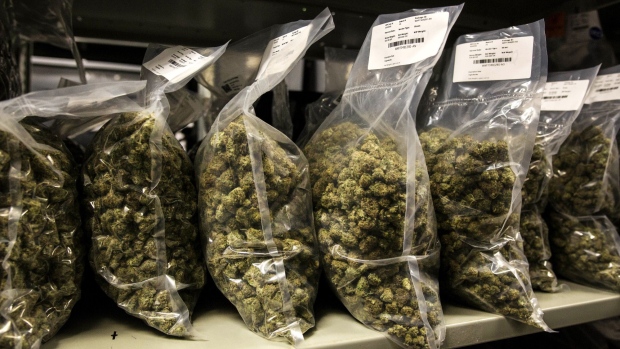 Packages of marijuana are seen on shelf before shipment at the Canopy Growth Corp. facility in Smith Falls, Ontario, Canada, on Tuesday, Dec. 19, 2017. , Bloomberg

(Bloomberg) -- Canopy Growth Corp. jumped after the cannabis producer said it expects to gain broad access to the U.S. market this year.

The Canadian company, which sells raw flower and other products containing THC in Canada, already has arrangements with Acreage Holdings Inc. and TerrAscend Corp. designed to help it speed products to market in the U.S. once it can do so legally. Canopy is increasingly optimistic as the country pushes closer to marijuana legalization at the federal level.

The comments underscore the momentum of the cannabis industry in the U.S. as a growing number of states legalize the substance and Democratic election wins offer hope for broader acceptance. Canopy said it is accelerating its growth strategy in the U.S.

Canopy’s U.S. shares climbed as much as 12% in New York trading, the biggest intraday gain in over a month. The stock gained 17% last year.

The company, which counts Corona beer producer Constellation Brands Inc. as an investor, said in October that it was pursuing a THC-infused beverage with Acreage to be introduced in some U.S. states this summer.