Cannabis companies rallied on Thursday, reversing a slump the day before, on renewed optimism over the lifting of restrictions on marijuana sales in five states this week.

Stocks moves gathered steam in the afternoon session after New York State’s governor Andrew Cuomo told a local radio station that New York State would look to legalize recreational pot next year. The nation’s fourth most populous state was on track to legalize this year before Cuomo scuttled plans in March.

Aurora Cannabis Inc., Tilray Inc. and Aphria Inc. led the advance, with double-digit gains. Aurora’s stock rose as much as 40 per cent, while Tilray advanced 33 per cent. Shares in Aphria, which operates mainly in Canada, rose 14 per cent after the company said it plans to buy a craft brewing company to expand into the U.S. ahead of a potential move to legalize. 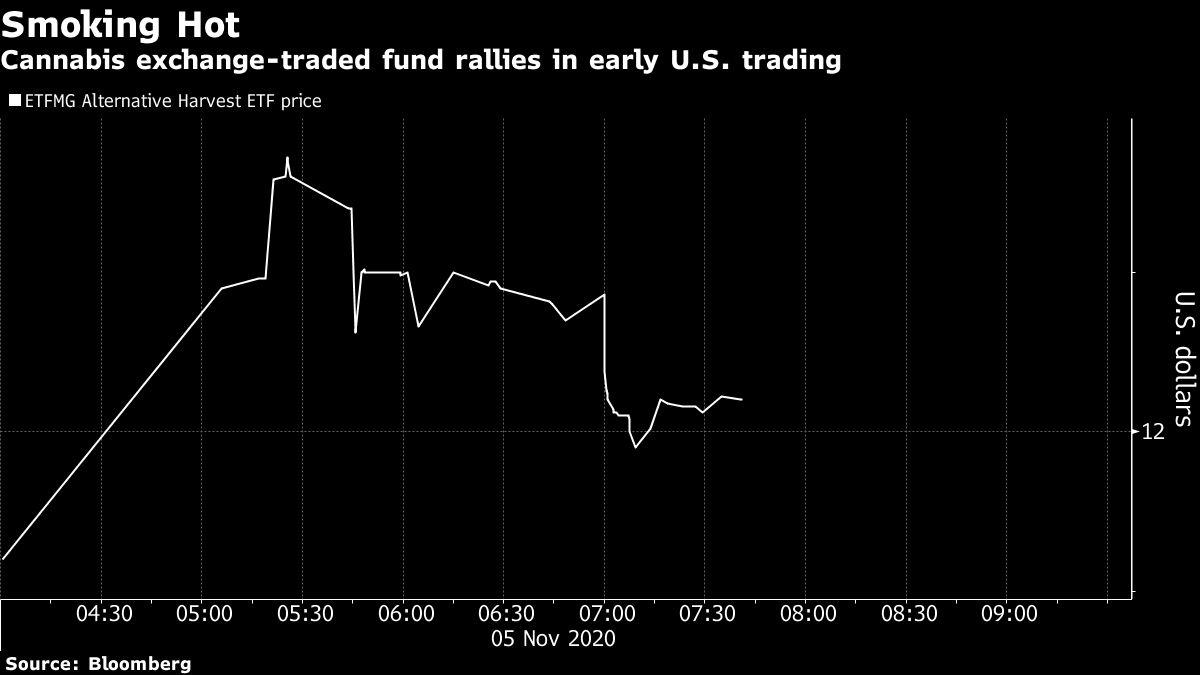 The ETFMG Alternative Harvest exchange-traded fund, or MJ, climbed 11 per cent the biggest intraday gain since March 26, after closing down 3.1 per cent on Wednesday. The gains followed ballot passages in Arizona, Mississippi, Montana, New Jersey, and South Dakota, which will now add to the 44 states that allow marijuana for medical or recreational purposes.

Boris Jordan, chairman of Curaleaf Holdings Inc., one of the largest cannabis companies, said on Wednesday the state passages were “a green landslide.”

It’s still a far cry from the vaunted industry hopes that sent the fund to record highs in September 2018. MJ has lost more than 70 per cent of its value since then. Despite growing support for cannabis in the U.S., federal legislation for legalized pot may be off the table for now, particularly with the possibility of Republicans retaining control of the U.S. Senate.

A divided government however may bode well for the enactment of the Secure and Fair Enforcement Banking, or SAFE, Act, which would enable cannabis banking, senior policy analyst Jaret Seiberg at Cowen & Co wrote in a note.

“This is likely to become the primary focus for the cannabis industry. The downside is that the SAFE Act would not be needed if there was a sweep as Democrats would have legalized cannabis,” Seiberg wrote.

Trulieve Cannabis Corp. CEO Kim Rivers said Senate Majority Leader Mitch McConnell’s statement Wednesday about reconvening the Senate to pass a stimulus bill by the end of the year was more good news for the industry, on top of the election results.