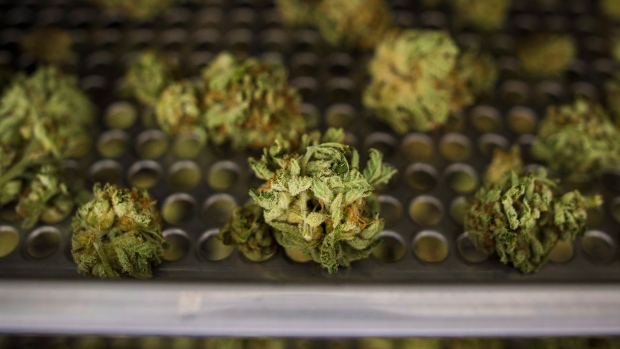 Short interest in high-flying cannabis stocks surged 52 per cent in the third quarter, and some investors say the wild price swings indicate there may be even more activity than the data reflect.

Total short interest in the marijuana space hit US$3.1 billion on Sept. 27, up from just over US$2 billion at the end of June, according to data from financial-analytics firm S3 Partners. That’s despite the fact that short sellers lost $731 million in September as cannabis stocks soared.

“It’s multiple standard deviations away from the norm,” said Ihor Dusaniwsky, head of research at S3 Partners. “You just don’t have this much shorting across a full sector.”

Much of the increased shorting activity was centered on just two companies: Canopy Growth Corp. and Tilray Inc.

Volatility is common in the emerging pot sector, but Tilray in particular has been on a roller-coaster ride over the past month. On a single day in September, the cannabis company’s shares nearly doubled before erasing the entire gain in less than an hour, only to finish up 40 percent. The stock has gained more than 700 percent since its July initial public offering.

This led investors to speculate that the stock was the victim of naked shorting, when an investor takes a short position without first borrowing the stock.

“Clearly there has been some monkey business going on,” said John O’Connell, chief executive officer of Toronto-based Davis Rea Ltd., an investment firm with about $600 million in assets. “The temptation to do naked shorting and all kinds of nefarious activities in this space is very high.”

Tilray has a very small public float of 10.3 million shares, just 13 per cent of its total shares outstanding, according to Bloomberg data. This means it’s extremely difficult to borrow for a short position, a fact that was reflected in the astronomical 600 percent fee that was being charged by brokerages in mid-September.

That has since fallen to 30 to 50 per cent, a number that’s “still extraordinarily high” compared to the single digits in most sectors, said Dusaniwsky. This shows how eager investors are to short a sector where price-to-sales ratios have reached triple digits.

“If I’m sitting here and I’m being charged 20 per cent, wow, my predicted return has to be pretty damn high in order to cover that and still leave me with a good net net return,” he said.

But some investors have given up on shorting cannabis stocks until things calm down.

“If we want to put US$100 on the table and see if we get back US$150 or we get back US$50, we’ll go to Las Vegas and gamble,” said O’Connell, who stopped shorting the space four or five months ago.

Greg Taylor, who manages the Purpose Marijuana Opportunities Fund, owns some puts in Tilray and has done some shorting in the past, but now plans to wait until clear winners and losers begin to emerge after Canada legalizes recreational pot on Oct. 17.

“Right now everything trades together, we can’t separate the winners from the losers,” he said. “We’re going to start doing more pair trading and long-short once we start seeing the numbers for the launch of legalization, which won’t be for another three to six months.”

Cannabis Canada is BNN Bloomberg’s in-depth series exploring the stunning formation of the entirely new – and controversial – Canadian recreational marijuana industry. Read more from the special series here  and subscribe to our Cannabis Canada newsletter to have the latest marijuana news delivered directly to your inbox every day.