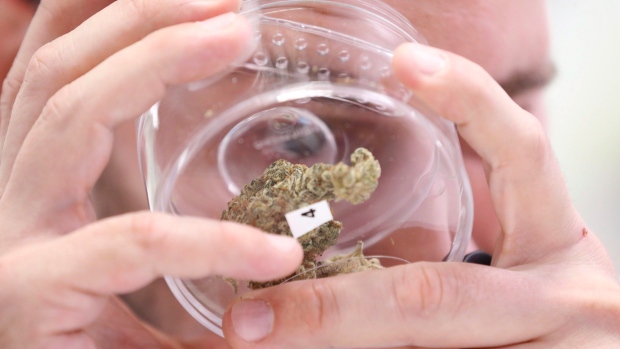 Jean Marc checks out a sample at a cannabis store in Winnipeg, Man., on Wednesday, October 17, 2018. Marijuana is now legal in Canada. , THE CANADIAN PRESS/John Woods

OTTAWA -- Statistics Canada says Canadian spending on cannabis rose 1.1 per cent to roughly $5.9 billion on an annualized basis in the third quarter.

Nearly 84 per cent of purchases were illegal and for non-medical use, down from 98 per cent in mid-2014 as cannabis consumption for medical use has increased.

The agency estimates that of the $4.9 billion in illegal, non-medical pot purchases in the third quarter, roughly 1.9 per cent came from home production.

About $836 million was spent on medical cannabis during the period, including $88 million of personal production.

Household spending on cannabis has increased for six consecutive quarters, averaging a growth rate of 1.5 per cent.

The agency says household spending on marijuana has increased by 73 per cent since the second quarter of 2001, when the Canadian government legalized pot for medical purposes.