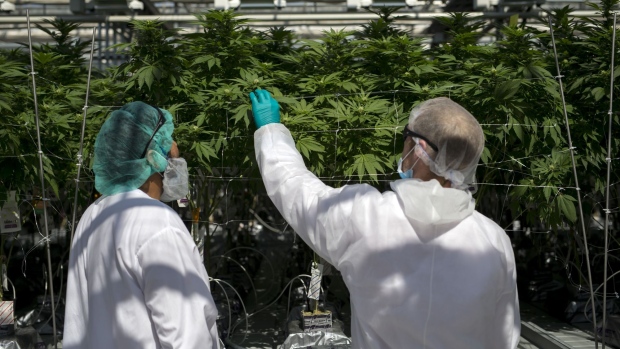 Employees inspect cannabis plants at the CannTrust Holdings Inc. Niagara Perpetual Harvest facility in Pelham, Ontario, Canada, on Wednesday, July 11, 2018. Canadian pot stocks have had a wild ride in the past year with the BI Canada Cannabis Competitive Peers Index surging about 250 percent from October to December as the road to legalization became clearer in Canada, before dropping by about 36 percent this year. , Bloomberg

(Bloomberg) -- Peter Aceto didn’t just lose his job as head of CannTrust Holdings Inc.: he likely lost out on about C$8.2 million ($6.2 million) in stock options, among the highest pay packages in the pot sector.

CannTrust fired Aceto, and chairman Eric Paul was asked to resign Thursday after a Globe and Mail report cited internal emails showing the executives were aware that pot was being grown in unlicensed rooms about seven months before Health Canada unearthed the breach.

Aceto’s stock options will likely be canceled, as typically happens when an executive is fired with cause. Even if they’re not canceled, the options remain well under water following the recent stock plunge related to the licensing scandal.

According to the options awarded to Aceto when he joined the company in October, a third were to be vested annually in one-third increments, with two-thirds to be vested based on achieving share price milestones of C$15 to C$25 over three years. CannTrust traded at about C$3 on Friday, well short of Aceto’s strike price of C$11.88 for his 1 million options.

Cannabis extractors have posted outsized share gains this year, and analysts remain bullish on the sub-sector.

Key players include MediPharm Labs Corp., Valens Groworks Corp., and Neptune Wellness Solutions Inc. All three have seen their stock more than double since the start of 2019.

“Extraction will be in high demand as additional cultivation comes online, with Valens poised to be a leading player,” Eight Capital analyst Jenny Wang told clients in a note. The investment bank initiated stock coverage with a buy recommendation and price target of C$8.25.

One Wall Street bank attempted to estimate how many pot dispensaries may be needed across North America to garner optimal legal sales. The magic number: about three dispensaries per 100,000 people, Seaport Global Securities LLC said in a note. The New York-based investment bank reviewed dispensary counts by state and province across North America, along with data available on industry sales receipts.

Flowr Corp. may have given investors an indication of appetite for equity offerings. The pot producer announced a C$43.5 million bought-deal financing last week, shortly after withdrawing an equity offering the prior week. Shares surged 21% after the pulled offering, though fell 17% after the bought-deal July 22. Toronto-based GMP Securities LP is lead underwriter for the sale, which is expected to close Aug. 8. The original share offering included Barclays, BMO Capital Markets and Credit Suisse.

The deal is a “major positive for Auxly’s shareholders,” AltaCorp Capital analyst David Kideckel said in a note to clients. Auxly is now “one of two cannabis companies to have signed a major deal with a global tobacco company, the other one being Cronos,” he added.

CannTrust Jumps After Firing CEO Amid Breach at Cannabis Company

It’s Getting Harder to Fire People for Using Marijuana