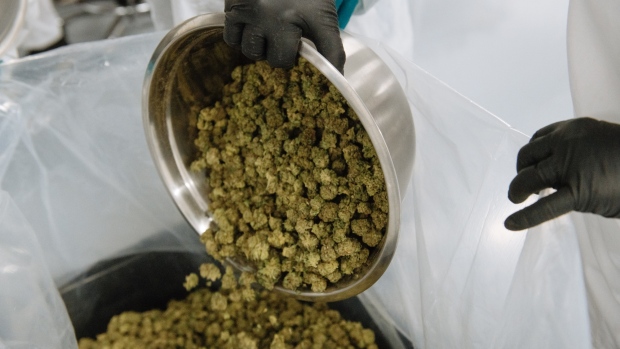 A worker pours a bowl of manicured buds into a bag at the CannTrust Holdings Inc. cannabis production facility in Fenwick, Ontario, Canada, on Monday, Oct. 15, 2018. Canada, which has allowed medical marijuana for almost two decades, legalizes the drug for recreational use on Oct. 17, joining Uruguay as one of two countries without restrictions on pot and putting the country at the forefront of what could be a $150 billion-plus global market when others follow. , Bloomberg

(Bloomberg) -- CannTrust Holdings Inc., the beleaguered pot company that’s lost 75% of its value after breaching regulations, had its license suspended by the Canadian government.

The company won’t be able to sell or produce cannabis, other than cultivating and harvesting existing plants, CannTrust said in a statement Tuesday. The suspension will remain in effect until it can demonstrate the breaches no longer exist or that the suspension was unfounded.

Shares tumbled as much as 17% when they resumed trading following the announcement.

The suspension won’t change much in the short term as the Vaughan, Ontario based company had already halted all sales and shipments of its products.

Health Canada, the government agency responsible for cannabis regulations, told CannTrust that it could potentially address the suspension by taking measures to ensure pot will be produced and distributed only as authorized and to recover cannabis that wasn’t authorized by the license. It would also need to improve key personnel’s knowledge of and compliance with regulations; and to improve record keeping and inventory tracking.

CannTrust’s management and board are reviewing the suspension with counsel and other advisers, the company said.

The breaches, which included growing pot in unlicensed parts of its greenhouse in Pelham, Ontario, led to the firing of Chief Executive Officer Peter Aceto and a joint investigation by securities regulators and police. The company has hired Greenhill & Co. to explore potential alternatives, including a sale.

To contact the editors responsible for this story: Brad Olesen at bolesen3@bloomberg.net, ;David Scanlan at dscanlan@bloomberg.net, Jacqueline Thorpe