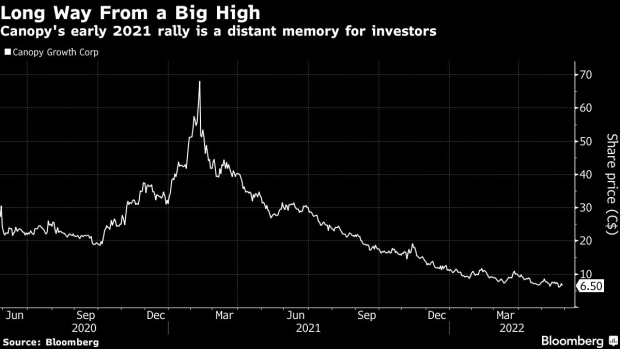 “We took actions in the quarter to reduce costs so that we can get to that profitability number,” Klein said Friday in an interview on BNN Bloomberg Television. “When I position our company strategy, it really is to be that North American cannabis player that’s brand-led and premium-focused.”

The Canadian weed producer reported net revenue of C$111.8 million ($87.7 million) for the quarter ended March 31, down 25% from a year earlier. Analysts had expected C$131.6 million in revenue, according to data compiled by Bloomberg.

Canopy posted an operating loss of about C$530 million in the quarter, including C$241 million in impairments and restructuring charges. Investors didn’t like what they saw, sending Canopy’s share price down as much as 17.8% in Toronto to the lowest level since 2016.

The weak quarter was a result of the company shifting its focus away from low-priced value brands toward mainstream ones, Klein said. Canopy’s value-priced business was 44% of revenue compared to 68% last year, he said.

Canopy brought in C$520.3 million in revenue for the the fiscal year, about 40% of which is from Canadian recreational cannabis. Klein noted that the company’s US brands are not fully consolidated into its financial statements. “If you brought it all together, our top line for the full year would be over C$1 billion, which would make us one of the top players in North America,” the CEO said.

Klein said there’s an opportunity to bring Canopy’s high-growth, west-coast brands into eastern markets. But in a note to clients, Cantor Fitzgerald analyst Pablo Zuanic questioned whether Canopy’s focus on building US assets “has put the company at a disadvantage in Europe, should markets there legalize before the US.”