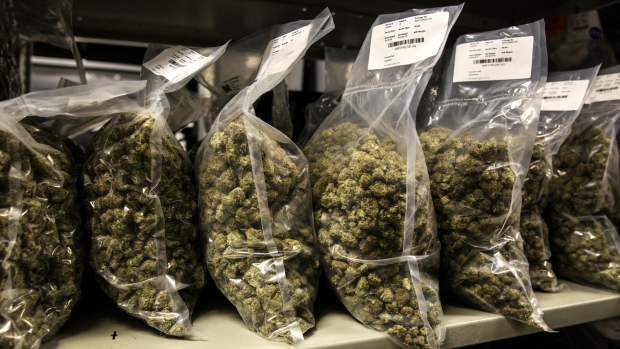 (Bloomberg) -- Canopy Growth Corp. shares gained as much as 7.8 percent in pre-market U.S. trading after the Canadian cannabis producer was said to be near a deal to acquire Acreage Holdings Inc., a cross-border purchase that analysts say would be “a big positive.”

The deal would allow Canopy to gain a toe-hold in the U.S. ahead of regulatory or legalization changes that would open up the world’s biggest potential marijuana market to operators, Jefferies analyst Owen Bennett wrote in a note. The timing would also allow the company to lock in a much lower price than if it waited until after legal changes, he said.

“They are now using the $4 billion in cash they got due to Constellation to get a route to control in the world’s biggest market, and what’s more, in the U.S.’s biggest player,” wrote Bennett, who rates Canopy Growth hold with a price target of $64. “Acreage can increase its dominance with the Canopy money, and Canopy locks in a price which we would imagine is significantly less than would be required if they waited for U.S. operations to be allowed.”

The purchase would also give Canopy some political muscle from Acreage’s board, which could help it navigate the expected U.S. regulatory shifts, Cowen analyst Vivien Azer says.

“Acreage has seeded their board with heavyweights including John Boehner (former Speaker of the House (R)), Bill Weld (former Governor of Massachusetts (R), Republican candidate for President) and Brian Mulroney (former Prime Minister of Canada),” wrote Azer, who rates Canopy outperform. “With the state of cannabis policy changes in the U.S. inextricably linked to politics, these relationships can certainly be viewed as offering outsized value.”

To contact the reporter on this story: Courtney Dentch in New York at cdentch1@bloomberg.net

To contact the editors responsible for this story: Chris Nagi at chrisnagi@bloomberg.net, Scott Schnipper