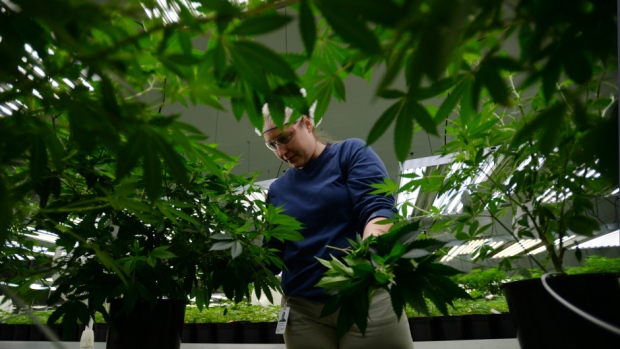 Canadian marijuana stocks went on a wild ride on Wednesday as a number of the companies’ shares soared in the morning and were later halted after massive spikes in trading.

Smith Falls, Ont.-based Canopy was halted five separate times. Its stock surged as high as 33 per cent, dropped as low as 27 per cent and ended down 15.24 per cent to close at $11.40 per share. More than 24 million shares of Canopy changed hands on Wednesday.

In its earnings report earlier this week, Canopy -- Canada's largest producer of medical marijuana -- reported that revenue rose to $8.5 million, a 245 per cent increase over the same period last year.

The Investment Industry Regulatory Organization of Canada issued the halt and resumption notices, citing “single-stock circuit breaker” as the reason.

The financial markets regulator's single-stock circuit breaker is usually triggered when securities experience price changes of at least 10 per cent.

“IIROC can make a decision to impose a temporary suspension (halt) of trading in a security of a publicly-listed company. Trading halts are implemented to ensure a fair and orderly market,” IIROC said in a statement.

Marijuana stocks have been on a tear since last week, after California, Maine, Massachusetts and Nevada voted to approve recreational use of the drug. The four states join Alaska, Colorado, Oregon, Washington, and Washington, D.C., which already have similar laws in place.