The Smiths Falls, Ont.-based company said it made $123.8 million in net revenue in its fiscal third quarter, while reporting an adjusted EBITDA (earnings before interest, tax, depreciation, and amortization) loss of $91.7 million.

Analysts polled by Bloomberg expected Canopy to report $105.4 million in revenue in its third quarter and an adjusted EBITDA loss of $110 million.

The company said total operating expenses in the third quarter fell 14 per cent from the prior quarter to $231.7 million, while reporting a net loss of $124.1 million.

"Make no mistake: we have a lot of work to do," said Canopy Chief Executive Officer David Klein during a conference call with analysts on Friday. “I am already taking actions to keep us in the leadership position in the cannabis industry.”

Klein said during the conference call that his mandate as CEO includes three key priorities: improving Canopy’s connection with its consumers, ensuring that there is more “discipline in the organization," and defining a path to profitability.

“The industry has evolved and we need to focus on specific markets where we have the legitimate right to win,” he said. 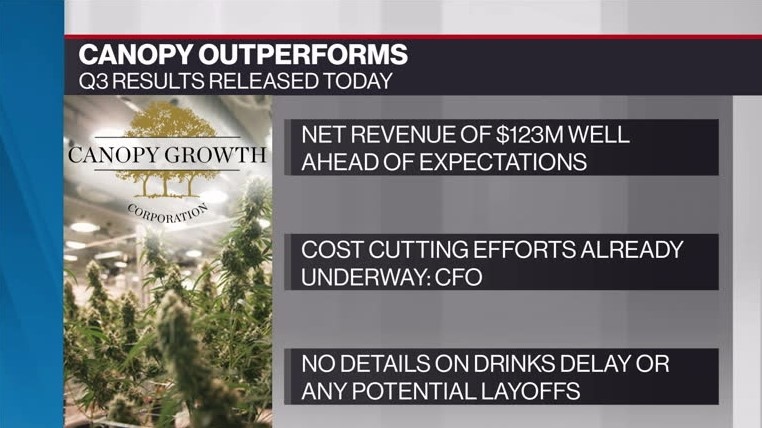 Canopy's chief financial officer, Mike Lee, said in a statement that the pot giant plans to take further steps to reduce costs and “right-size” its business to improve its margins and cash flow. The company has already enacted cost controls and reduced stock-based compensation in its current fiscal year, Lee added.

Cowen & Co. analyst Vivien Azer said Canopy’s quarterly results show “healthy sequential growth” and demonstrate that the company is on track to produce gross margins of about 40 per cent by the end of its fiscal year.

“With a much cleaner earnings release, we can already see the benefits of new leadership bringing financial discipline to the company,” Azer said in a note to clients Friday.

Canopy reported an improvement across a wide swath of its financial results, including Canadian and international cannabis revenue, while securing a leading 22-per-cent share of the Canadian recreational pot market in the quarter, the company said.