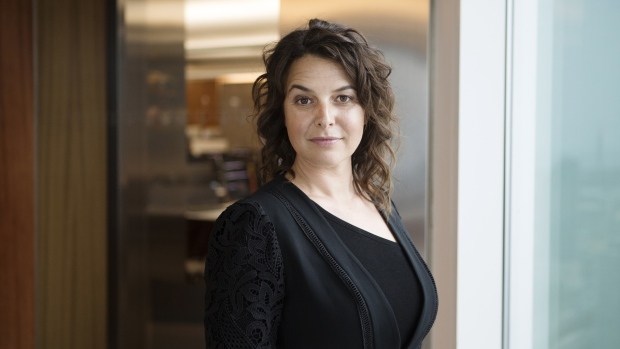 Hilary Black has been a passionate lawbreaker since she graduated from high school. Today, she sits in the C-suite of the world’s largest cannabis company.

As chief advocacy offer at Canopy Growth Corp. (WEED.TO), with a market value of about $23 billion, Black works to improve patient access to medical marijuana globally by lobbying to ease laws and regulations, educating health professionals and working with care groups.

The transition to a big corporation hasn’t gone down well with some other activists, but Black sees it as the best way to take her fight to the global stage.

“I am often called a sellout and a traitor and turncoat,” she said in an interview at Bloomberg’s Toronto office. “But I feel like I have a responsibility to sit where the decisions are being made.”

Black, 43, has been one of the most influential activists on Canada’s long, winding road to cannabis legalization -- for medical purposes in 2001 and recreationally last year. She founded the country’s first marijuana dispensary in 1997. She was involved in many of the court cases and government hearings that gradually liberalized the country’s laws. And she’s a recipient of the Queen Elizabeth Diamond Jubilee Award for her dedication to patient advocacy and social justice.

Black first became aware of the need for medical cannabis when she was working at a hemp store in Vancouver right out of high school. People with cancer and AIDS would come into the shop looking for marijuana to help ease their symptoms but it didn’t sell pot.

So Black became a dealer. Armed with a Motorola pager, she would bike around Vancouver delivering cannabis to people for medical purposes. Inspired by the need she saw, particularly among intravenous drug users and gay men in Vancouver’s impoverished downtown east side, she moved first to Amsterdam and then to California to learn all she could about medical marijuana.

When she returned to Vancouver, she founded the B.C. Compassion Club Society in 1997 at the age of 21. It was the first medical cannabis dispensary in Canada, modeled on similar organizations in San Francisco. The club, which employed about 40 people and had about 10,000 patients at its peak, is still operational.

Black’s goal was to create a “civilly disobedient but conservative organization” that carefully vetted its patients to ensure they had documents of diagnosis and their physician knew they were seeking medical cannabis.

“I was willing to go to jail,” she said. “I had this idea that I was going to hunger strike.”

It never came to that, as attitudes were quickly changing. Police began referring patients to the Compassion Club, including a women with breast cancer who was the victim of an attempted mugging while looking for cannabis in a rough neighborhood.

Other cities across the country adopted the club’s model and Black became a national expert on cannabis legalization, winning over Canadian senators in the country’s upper lawmaking chamber with tours of the facilities and successfully advocating in court when one of her suppliers was busted.

As Canada’s pot laws evolved, so did Black’s career. She joined licensed producer Bedrocan Cannabis Corp. as director of patient advocacy in 2015. Bedrocan was acquired by Smith Falls, Ontario-based Canopy, then known as Tweed Marijuana Inc., later that same year.

“I wanted to work inside the legal framework,” Black said. “I believe strongly in universal access to health care, and patients across the country did not have equal access to medical cannabis.”

Part of her job includes working to make sure Canopy is a good corporate citizen. After her best friend’s 18-year-old daughter died of a fentanyl overdose in 2017, she spearheaded a $2.5 million donation to the University of British Columbia to establish the Canopy Growth Professorship of Cannabis Science to study how cannabis can help people who are addicted to opioids.

Black considered going to medical school before founding the Compassion Club but has no formal medical training. She believes the clinical research being conducted by Canopy and its competitors will help prove the benefits of medical cannabis that she’s been hearing anecdotally for years.

“We are moving beyond researching if cannabis is effective and starting to unlock this complex medicine to understand how it is most effectively used,” she said.

Black believes that there’s more work to be done in Canada. The country still charges sales and excise taxes on medical cannabis, unlike other prescription drugs, which she believes is unfair. And people can still be sent to jail for possession, cultivation and trafficking outside of the legal market. Recently an indigenous man in Manitoba was sentenced to 10 months in jail after he was found with 85 grams of pot.

“I’m furious about it,” Black said, tearing up. “My company is allowed to have cannabis factories across the country and we just put a First Nations man in jail for 10 months for possession.”

Canopy received a US$4 billion investment from alcohol giant Constellation Brands Inc. last year, making it the best capitalized company in the industry. It may now be a corporate titan but Black believes it can be a force for good.

“A large multinational corporation doesn’t have to automatically be associated with doing harm in the world,” she said. “This is a new category, it’s a new industry and we have an opportunity to do business in a new way.”