Canopy Growth Corp. is shaking up its senior management team, announcing the departure of two C-level executives Friday as the pot giant looks to end a string of quarterly revenue declines.

Canopy said its Chief Financial Officer Mike Lee and Chief Product Officer Rade Kovacevic have stepped down from their positions, effective immediately. Both will remain with Canopy until the end of the year on an advisory basis, the company said.

In their place, Canopy said Judy Hong, the company's vice president of investor relations and competitive intelligence and a former Goldman Sachs analyst, will be its interim CFO while Tara Rozalowsky, currently in charge of the company's beverage and edibles division, will take on the chief product role on an interim basis as well.

"These decisions reflect management and the board’s vision for building a best-in-class organization that is well-positioned to deliver long-term growth and shareholder value,” said Canopy Growth Chief Executive Officer David Klein, in a statement. "We appreciate Mike and Rade’s contributions to advancing Canopy Growth to our position as a cannabis industry leader."

The executive departures come weeks after Canopy reported disappointing fiscal second-quarter results, where revenue fell by three per cent from a year ago to $131.4 million, its third-straight quarterly sales decline. The company's share of the Canadian recreational market has also tumbled over the past several months despite acquiring two smaller companies in the hope of taking a leadership position in the space.

According to figures from industry data provider Hifyre, Canopy's share of the Canadian market has tumbled to about nine per cent, while some of its peers including Tilray Inc. and Hexo Corp. have also experienced similar declines as smaller cultivators gain traction.

​During a call with analysts earlier this month, Klein said the company needs to make $225 million to $250 million in quarterly revenue to become profitable, although Canopy withdrew its guidance on when its expects to generate positive adjusted earnings before interest, taxes, depreciation, and amortization (EBITDA). 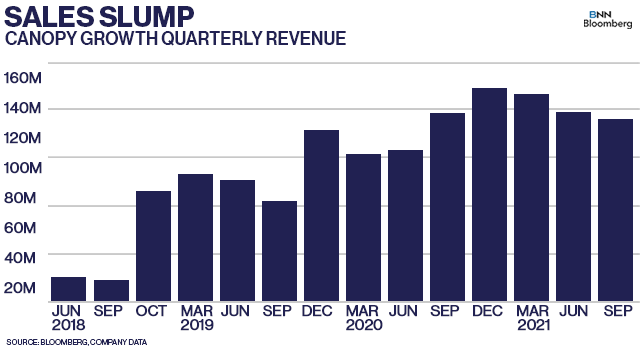 Despite the challenging operating conditions, Canopy still has "big aspirations for Canada,” according to BMO Capital Markets Analyst Tamy Chen in a recent report. It has begun looking to improve the quality of its dried flower products as well as cultivate better genetics from mother cannabis plants, a process that the company expects to take five to six months, Chen said.

While Canopy continues to focus on improving its domestic operations, it also is awaiting positive developments that pro-legalization bills will eventually get passed by legislators in Congress, which would allow it to compete in the U.S. cannabis market. It has already positioned itself to take control of multi-state-operator Acreage Holdings Inc. and edibles maker Wana once cannabis is legal on a federal level, but has already developed a range of CBD offerings led by its partnership with Martha Stewart and expanded its sports beverage BioSteel business.

"Over the past several years, Canopy Growth has made meaningful progress in refining its strategy, right-sizing its operational footprint, and putting the company on a clearer path to profitability," said Bill Newlands, president and CEO of Constellation Brands Inc., in a statement. Constellation is a major shareholder in Canopy with a 38.6 per cent stake in the company following a $5 billion investment in the pot giant back in 2018.

"We continue to believe that Canopy is well-positioned to establish a strong leadership position in the emerging global cannabis market. As Canopy prepares for federal legalization of cannabis in the U.S., now is the time to accelerate efforts to build an industry-leading product portfolio and route to market strategy."