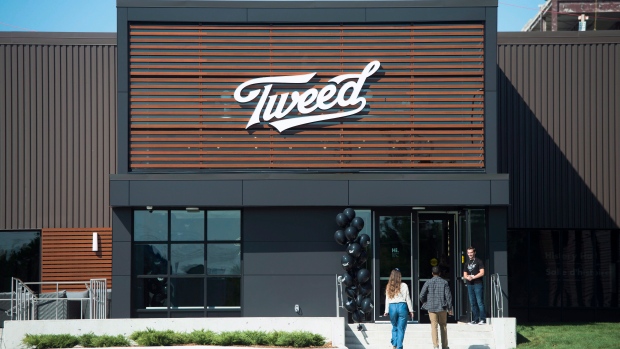 TORONTO -- Shares of Canopy Growth Corp. closed down almost 10 per cent Friday after global alcohol giant Constellation Brands Inc. said it did not plan to make any more cash contributions to the cannabis firm.

Constellation Brands made the comment in a U.S. regulatory filing where it said it expects to record a comparable nine month net loss of US$125.4 million in its Canopy investment.

Victor, N.Y.-based Constellation Brands said it still holds warrants to buy Canopy Growth shares, including some priced at less than half Canopy's current share price, but that it will evaluate use of the blocks of warrants prior to their expiration in May 2020 and in November 2023.

Beyond the warrants, Constellation said it does not plan any further cash contributions to the company as it says Canopy is adequately capitalized with more than $2.7 billion in cash and marketable securities as of Sept. 30.

The company behind brands like Corona beer announced a deal in August of last year to invest $5 billion in Canopy Growth to secure a 38 per cent ownership of the company and become the largest shareholder.

In June, the booze brand said it was "not pleased" with Canopy's earnings after a wider-than-expected net loss. A week later company founder and CEO Bruce Linton was forced out of his position, and the company.

In August, Constellation recognized a US$839-million decrease in the fair value of its Canopy investments during the quarter ended Aug. 31 as the cannabis industry struggles to meet expectations post-legalization.

The same month, Canopy reported a $1.28-billion loss or $3.70 per share for the three months ended June 30, mainly due to a non-cash loss of $1.18 billion on the extinguishment of warrants held by Constellation.

Since legalization, Canadian cannabis companies have struggled on profitability and many have missed expectations, driving share prices down.