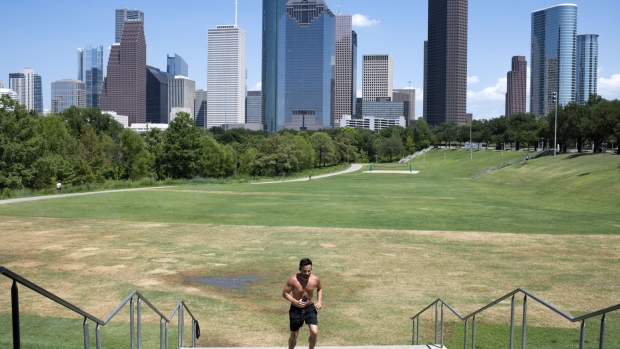 A runner jogs in Buffalo Bayou Park during a heatwave in Houston, Texas, US, on Monday, July 11, 2022. Texas residents and businesses, including the biggest names in oil, autos and technology, are being asked to conserve electricity Monday afternoon during a heatwave that's expected to push the state's grid near its breaking point. , Bloomberg

(Bloomberg) -- Cantor Fitzgerald is planning to start a power and energy financing unit and has hired Wall Street veterans to run it, according to people familiar with the matter.

Former Guggenheim Partners managing directors Matthew Brogdon and John Siris will start work at the investment bank next month after gardening leave, said the people, who asked not to be identified because they weren’t authorized to speak publicly. The bankers will be based in Houston and report to Christian Wall, head of structured products, the people said.

Cantor, led by Chairman and Chief Executive Officer Howard Lutnick, has been on an expansion drive in the past year, hiring William Ferri from UBS Group AG as global head of asset management in February. It acquired the asset-management business of Smith Group Asset Management last July.

Prior to Guggenheim, Brogdon and Siris both were previously at Citigroup Inc. Brogdon was co-head of acquisitions and divestitures while Siris worked in structured-products origination.