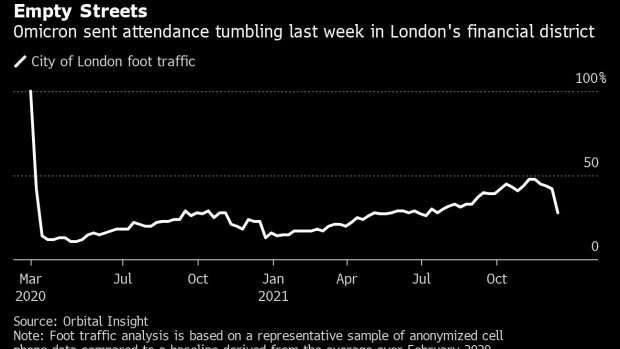 (Bloomberg) -- The omicron variant is causing a deluge of covid cases across Wall Street but a top Cantor Fitzgerald LP executive says he expects firms to weather the storm.

“I’d say most banks experienced more cases last week than we’ve seen in the last six months combined,” Bandelier said in a phone interview. “The good news is all the employees are exhibiting mild symptoms, which I think is consistent with everything we’re hearing.”

The number of people in financial centers has tumbled as omicron takes hold, according to an analysis by Orbital Insight, which monitors activity through satellites and mobile phone data. In the City of London, foot traffic fell on Dec. 15 to 28% of a February 2020 baseline, compared to about 50% at the start of December.

Cantor has told staff they can choose to work from home or one of its remote offices until at least early January. Just weeks ago about 60% of employees were back in its New York office, Bandelier said. But he sees reasons for optimism.

“We’ll see what happens, but I think there is light at the end of this tunnel because it seems that everybody is back feeling great after three days,” he said.