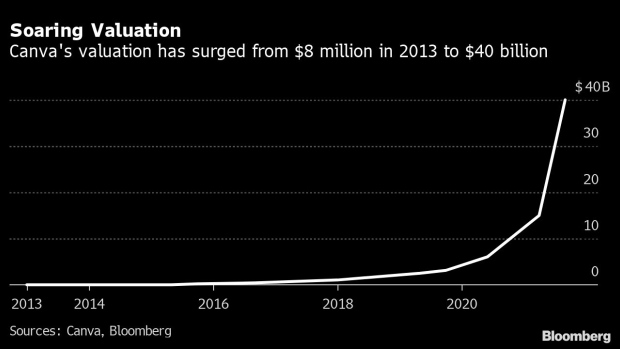 Canva’s valuation has almost tripled from $15 billion just five months ago when it raised $71 million. It’s now the world’s fifth most valuable startup after ByteDance Ltd., Stripe Inc., SpaceX and Klarna Bank AB, according to data from research firm CB Insights. The Sydney-based company was valued at $6 billion in June 2020 and $3.2 billion in late 2019.

“We want to build one of the world’s most valuable companies,” Chief Executive Officer Melanie Perkins said in a video interview from Sydney. “We’re moving in the right direction, but we’re not there yet.”

At the age of 19, Perkins became business partners with Cliff Obrecht and the duo started their first design platform, Fusion Books. Then in 2013, Cameron Adams joined the team and the three launched Canva to make it easier for people to design, be it logos, posters or business cards. Users can upload photos or select stock images and use preset filters and fonts to customize designs.

Canva plans to use the fresh capital to invest in product development. Perkins said one opportunity is portfolio websites -- she believes people will increasingly create their own sites rather than send a resume or presentation materials to showcase their work. “There’s a lot of presentations, invitations, marketing materials, and we believe that a lot of those things will actually become websites over the years to come,” she said.

The company also plans to double the size of its workforce in the coming year, after already increasing the number of employees to about 2,000 from 1,000 in the past year.

It now has more than 60 million monthly active users in 190 countries. The company has been doubling its revenue each year and it’s on track to exceed $1 billion in annualized revenue by the end of this year, Perkins said.