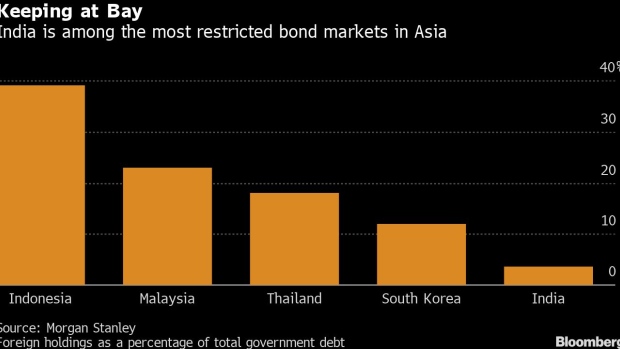 Street vendors sell food from carts in Raghunath Market at night in Jammu, Jammu and Kashmir, India, on Wednesday, Nov. 15, 2017. The head of treasury at State Bank of India is betting against the street. Inflation will stay anchored after the recent uptick, giving the central bank room to cut interest rates and bonds to rally, C. Venkat Nageswar said. Photographer: Dhiraj Singh/Bloomberg , Bloomberg

(Bloomberg) -- The trickle of foreign funds into India’s sovereign bonds can turn into a flood if Prime Minister Narendra Modi eases access to the nation’s debt that has made it the most restrictive among major Asian economies.

That’s the finding of a survey of asset managers -- in Singapore, Tokyo, London and New York -- conducted by Bloomberg. More than 90% of the 65 investors said they would add to their holdings of rupee bonds if the curbs are eased, while 76% said access to the nation’s market is harder compared with Asian peers.

Overseas funds have long sought greater access to Indian bonds, drawn to an economy where the yields are among Asia’s highest. Foreigners hold just 3.7% of the almost 60 trillion rupees ($835 billion) of sovereign bonds issued by India, and the government has set a 6% limit on foreign ownership.

In comparison, Indonesia has no restrictions and global funds own about 40% of local currency government debt. Foreigners bought $245 million of rupee bonds this quarter, which pales in comparison to the $2.8 billion they pumped into Indonesia, data compiled by Bloomberg show.

The survey comes after Bloomberg LP, the parent company of Bloomberg News and Bloomberg Barclays Indices, in September announced that it would help Indian authorities navigate a course to inclusion in international bond benchmarks.

Getting added into global indexes could attract billions of dollars, which would supplement India’s waning domestic savings as Modi sets his sights on doubling the size of the economy over the next five years.

Here are other highlights of the report: