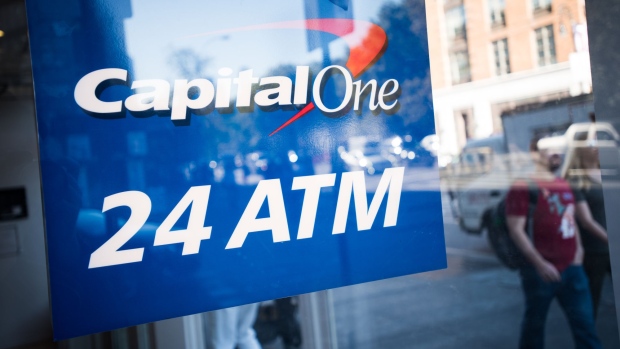 (Bloomberg) -- Capital One Financial Corp. will eliminate overdraft and non-sufficient fund fees for consumer-banking customers starting next year, joining a growing number of U.S. banks to ditch the practice.

Most customers will still be allowed to spend more than they have in their accounts, but that service won’t come with a fee, Chief Executive Officer Richard Fairbank said in a memo to staff on Wednesday. Customers will have to opt into the service and must show a pattern of steady deposits to access it.

“We will look at customers’ behavior to make sure they don’t overdraft frequently,” Fairbank said in the memo. “We don’t want our customers becoming reliant on spending money that they don’t have.”

As the country’s sixth-largest retail bank, Capital One is the biggest yet to make such a move. It follows a similar announcement from Ally Financial Inc., while the U.S. arm of Banco Santander SA said last month it will stop charging fees on overdrafts of $100 or less.

A typical overdraft fee is about $35. The charges are assessed if a customer spends more than they have in their checking account and the bank temporarily covers the difference -- a service that generated roughly $15 billion a year for U.S. banks before the pandemic. The practice has drawn ire from regulators and lawmakers alike.

Frequent users of overdraft protection -- consumers who use the service one or more times in a month -- now account for more than half the profitability of mass-market checking accounts, according to the consultancy Oliver Wyman Inc. That means lower-income consumers often subsidize the free checking accounts used by their wealthier counterparts.

“If Capital One can do this, other banks can do this,” Lauren Saunders, associate director or the National Consumer Law Center, said in an interview. “I certainly hope that other banks will follow Capital One’s lead and get rid of these abusive fees.”

Industrywide overdraft revenue had been steadily rising for years before the pandemic. Last year, though, it plummeted as consumers curbed spending while they remained under lockdown orders and banks offered waivers on the fees to customers affected by Covid-19.

Capital One said the move is likely to cost $150 million a year in revenue. The firm collected $93 million in overdraft-related service charges last year, according to filings with regulators. That compares with the $1.46 billion at JPMorgan Chase & Co. and $1.11 billion at Bank of America Corp.

“Over the years we have taken our own path,” Fairbank said. “We have capped fees, waived fees and introduced grace periods for consumers to turn their balances positive before fees are assessed. Our fee levels are at the far low end of the industry. But we aren’t done yet. We are going to zero.”