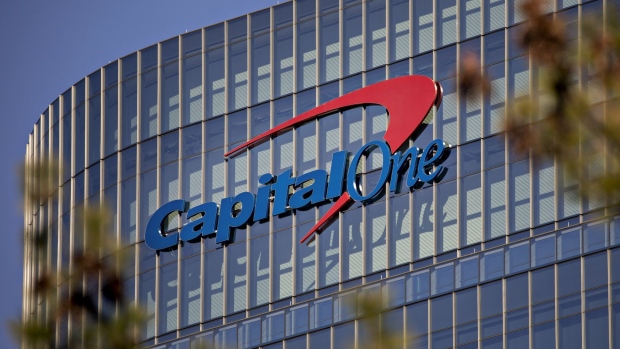 Signage is displayed at Capital One Financial Corp. headquarters in McLean, Virginia, U.S., on Wednesday, Nov. 6, 2019. Capital One's July 29 disclosure of a data breach exposed the company to regulatory fines and lawsuits, which could cost more than $200 million according to Bloomberg Intelligence. Photographer: Andrew Harrer/Bloomberg , Bloomberg

(Bloomberg) -- Capital One Financial Corp. dropped the most in two months after warning it would be forced to spend more for coders and software engineers amid escalating competition for technology workers.

The increased compensation costs will put pressure Capital One’s efficiency ratio, a key measure of profitability that shows how much it costs to produce a dollar of revenue, Chief Executive Officer Richard Fairbank said late Tuesday.

“Tech labor costs are an elephant in the room,” he said on a conference call after his firm reported fourth-quarter results. Most companies are recruiting from a small pool of qualified talent, Fairbank said. “It is the biggest imbalance I’ve seen in my three decades building and running this company in a labor market.”

Banks have been spending more on technology to fend off upstarts and ensure their products keep up with consumer demand for more digital options. Capital One, for its part, has also been public about its push to move all of its systems and infrastructure to the cloud.

McLean, Virginia-based Capital One has long said it hopes to shave its operating efficiency ratio down to about 42%. At the end of last year, the metric stood at about 45%.