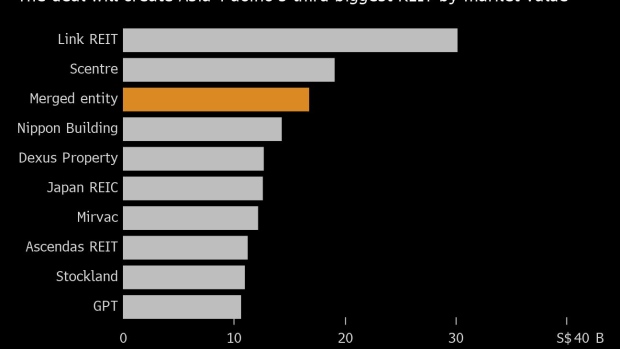 Booths stand in the atrium of Raffles City mall, operated by CapitaLand Ltd., in Chongqing, China, on Wednesday, Nov. 27, 2019. China's leaders vowed to avoid systemic financial risks next year and keep growth in a "reasonable range," state-run Xinhua News Agency reported, citing a Poliburo meeting in Beijing on Friday, as the economy stutters with its slowest growth in decades. Photographer: Qilai Shen/Bloomberg , Bloomberg

(Bloomberg) -- CapitaLand Mall Trust and CapitaLand Commercial Trust plan to merge in an S$8.3 billion ($6.2 billion) deal, the latest in a string of real estate investment trust consolidations in Singapore.

CapitaLand Mall Trust will buy all CapitaLand Commercial Trust units for $999.1 million cash and the issue of S$7.2 billion of new shares, according to an exchange filing Wednesday, with the balance made up of fees and other expenses.

The merger is at least the fifth tie-up among Singapore-listed REITs over the past 12 months and ranks as one of the top 10 M&A deals of all time in the city-state. Benefits include the ability to consolidate management expertise and build a bigger war chest for acquisitions.

Combined, the entity is expected to be the largest REIT in Singapore by market value and total portfolio property value, according to Wednesday’s statement. It will have the ability to undertake up to S$4.6 billion of overseas acquisitions in developed countries, while remaining predominantly Singapore focused.

“It’s a trend where we see REITs pushing for bigger size and diversification, both in terms of geography and asset type,” said Joel Ng, an analyst at KGI Securities (Singapore) Pte. “Given the limited opportunities in Singapore for retail and office acquisitions, the combined entity will allow for more such integrated developments as it expands overseas.”

The enlarged scale of the combined portfolio should allow the new group to compete better in Singapore and overseas in the retail and office sectors. Higher trading liquidity and a potential for positive re-rating could also bring a more competitive cost of capital.

The total cost of the CapitaLand merger comprises the plan consideration of S$8.2 billion, an acquisition fee of S$55.6 million, and professional and other fees and expenses of S$22 million. The cash component will be financed using existing debt facilities.

The tie-up is also expected to be distribution per unit and net asset value accretive to CapitaLand Mall Trust unitholders.

CapitaLand Mall Trust has a portfolio of 15 city and suburban shopping malls with good connectivity to public transport. It is the largest shopping mall owner on the island with a share of shopping mall floor space by net lettable area of about 14%, more than double its closest peer.

CapitaLand Commercial Trust’s portfolio, meanwhile, comprises 10 office and commercial buildings, eight of which are in Singapore’s central area, and two in Frankfurt. CCT is the largest owner of so-called grade A assets in Singapore’s central business district by net lettable area. Its buildings include One George Street, Raffles City, Collyer Quay and CapitaGreen.