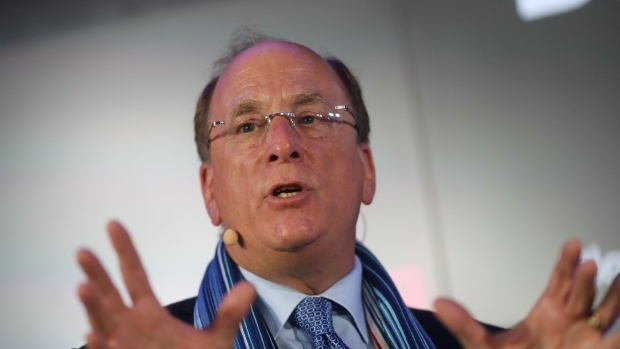 There’s now an overwhelming consensus behind zeroing-out emissions to slow down global warming. Nine of the 10 largest economies will soon align behind this goal, once President Joe Biden resets U.S. climate policy. The single-largest shareholder on the planet, BlackRock Inc., has likewise put its $8.7 trillion heft behind a powerful message to chief executives everywhere: The decades ahead will be defined by minimizing emissions, requiring an overhaul to everyone’s business models.

For two years in a row, the central theme of Fink’s “Dear CEO” letter has been climate change. His latest message, released at the end of January, breaks new ground by instructing companies to develop climate-compatible business plans backed by data on their emissions. “There is no company whose business model won’t be profoundly affected by the transition to a net zero economy—one that emits no more carbon dioxide than it removes from the atmosphere by 2050,” Fink wrote.

A few paragraphs later, the BlackRock chief switches terms slightly and defines his ultimate goal for companies to become “consistent with a global aspiration of net-zero greenhouse gas emissions by 2050.” The shift from carbon dioxide to greenhouse gas is a poor substitution. CO₂ makes up only about three-quarters of the emissions contributing to global warming; methane, nitrous oxide, carbon monoxide and other gases account for the rest.

That sets up an unclear standard for executives to follow, as scientists and other observers noticed. “I don’t think the intention of BlackRock is to confuse,” said Sasja Beslik, head of sustainable finance development at Bank J. Safra Sarasin. Precision matters, though, because “whatever BlackRock does has a huge impact on the financial industry and on the corporate sector.”

A BlackRock spokesperson said in response, “The higher purpose of the letter is to signal maximum ambition on climate.”

Another example of this phenomenon arose in the aftermath of Xi’s shock climate announcement in September 2020. The Chinese president surprised diplomats and world leaders with a declaration that his country would become “carbon neutral” before 2060. It was a watershed moment, with the single-largest contributor to emissions setting an ambitious climate goal.

But his use of “carbon” left scientists baffled, since the term is often mistakenly used to refer to both CO₂ and overall greenhouse gases. If Xi had meant only reducing CO₂, that wouldn’t be nearly enough to fight climate change. The other gases produced by China are themselves enormous—enough to rank as the world’s seventh-largest emitter, if a subset of gases could be considered as a standalone nation.

Perhaps Xi meant neutralizing all planet-warming emissions? China hasn't officially confirmed its stance, and different government researchers have said it refers to either CO2 only or all greenhouse gases. The environment ministry did not respond to a fax seeking clarification.

Confusing climate terminology has become commonplace among governments, and in some cases can even understate more far-reaching goals. Kelly Levin at the World Resources Institute found that many European countries say their goal is carbon neutrality, but digging in the documents reveals the target covers all greenhouse gases. California, which would be the world’s fifth-largest economy if it were a country, makes the same mistake.

“These are growing pains, as we translate the science into what it means for business and society,” said Ateli Iyalla, managing director of North America for CDP, a group advocating emission disclosures. “It’s important to use the right language and get the terminology right to send the right signals to the marketplace.”

The climate arena has become filled with imprecise shorthand. Fink’s letter uses the 2015 Paris Agreement to frame his net-zero instructions to CEOs, and the fact that powerful investors are now focused on keeping temperatures below 2°C of warming is a clear sign of progress. Unlike Fink’s letter, however, the Paris Agreement makes no mention of zeroing-out emissions specifically by 2050. That target comes from a 2018 special report by scientists to the United Nations on how to limit warming to 1.5°C—a Paris stretch goal that Fink’s letter doesn’t mention.

Such details may seem minor. But if the leadership of a giant asset manager or a global superpower falls short of precision in their climate guidelines, imagine the difficulty facing CEOs on the receiving end of these messages. Fink’s letter is likely to set off a race to create satisfactory disclosures by legions of executives who will be less sophisticated on climate issues. “If you gave the average CEO a multiple-choice question whether the Paris Agreement goal is 2°C or 1.5°C, I wonder what they would write,” said Glen Peters, research director at the Center for International Climate Research.

Terminology issues may even reflect a shortage of climate expertise across the top echelons of business and government. Among the 1,188 board members of the 100 largest U.S. companies, for example, only three had climate expertise and only 6% offered broader environmental expertise, according to a new study from the New York University’s Stern Business School. In the last U.S. Congress, less than 10% of elected officials had scientific qualifications. In Britain, which will host the crucial COP26 climate conference in November, only 16% of members of parliament have backgrounds in science.

“It’s revealing that a lot of financial institutions are thinking about” climate goals, said Ben Caldecott, director of the Oxford Sustainable Finance Program. “But they aren’t being exposed to climate scientists who can make sure they get the details right.”