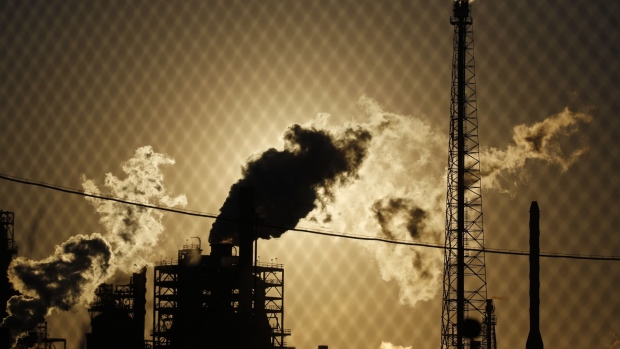 The Italian oil company Eni SpA will set a goal of reaching net-zero emissions in its European operations by 2050, Chief Executive Officer Claudio Descalzi told Bloomberg in an interview. In doing so, Eni will become the fifth oil major to have made similar pledges within the past year. (Repsol SA, BP Plc, Royal Dutch Shell Plc and Total SA got there first.)

The timing is no coincidence. In June 2019 the U.K. and France passed laws requiring carbon neutrality by 2050, and the EU announced in December its intention to set a similar goal. “This industry responds to policy and economics very fast,” says Bob Dudley, former chief executive officer of BP and chairman of the Oil and Gas Climate Initiative.

What’s happening is something that a group of wonks predicted two years ago—and if they are right, it’s only the start. Brought together under the auspices of the Principles for Responsible Investment, a United Nations-supported network of investors, the wonks developed a framework they called the “inevitable policy response” (IPR).

Here’s how they explained it:

Government action to tackle climate change has so far been highly insufficient to achieve the commitments made under the Paris Agreement, and the market’s default assumption appears to be that no further climate-related policies are coming in the near-term. Yet as the realities of climate change become increasingly apparent, it is inevitable that governments will be forced to act more decisively than they have so far.

If governments don’t act sooner, then they will “inevitably” do so in the period between 2023 and 2025, the IPR team predicted. When they do, the world will finally bend its emissions trajectory for good.

Sudden policy changes would be disruptive. Ben van Beurden, CEO of Royal Dutch Shell Plc, fears that a “disorderly transition” would follow, leaving companies with stranded assets and robbing investors of expected returns. “The thing with stranded assets is, if you wait until governments act, then it’s probably too late,” says Andrew Grant, head of oil, gas and mining at Carbon Tracker. “It’s prudent to get ahead of that happening.”

That is why Jason Eis, executive director of Vivid Economics, created a scenario-planning tool with the IPR team to help companies rethink priorities and investors rejig their portfolios. The tool is already having an impact. “There’s been a real change in how investors speak to companies about climate risk,” says Eis. Many of the European oil majors Eis has spoken to are now adopting zero-emissions plans, though he refuses to speculate on how much impact the IPR’s theories may have had.

It’s not just the oil and gas industry. Consumer-goods companies are competing to put out the most ambitious climate plans. Mining companies are trying to get rid of their coal assets. Electric car companies are raising astonishing sums of money. Utilities want to become “ supermajors” powered by renewables. We are still in the middle of the pandemic, and, instead of slowing down, the energy transition appears to be picking up pace. Companies and investors are starting to make changes in order to avoid a disorderly transition, but there’s still a long way to go.

The inevitable policy response is already playing out, says Eis. Witness the EU’s Green Deal and its work on setting out rules for what counts as “green” investment. It’s a good bet that we’ll see more and more countries join in. “The risk of an ‘inevitable policy response’ is unfolding really quickly and needs to be incorporated as a business risk, not just mentioned in a corporate sustainability report,” says Eis. Laggards have been warned.

Akshat Rathi writes the Net Zero newsletter on the intersection of climate science and emission-free tech. You can email him with feedback.