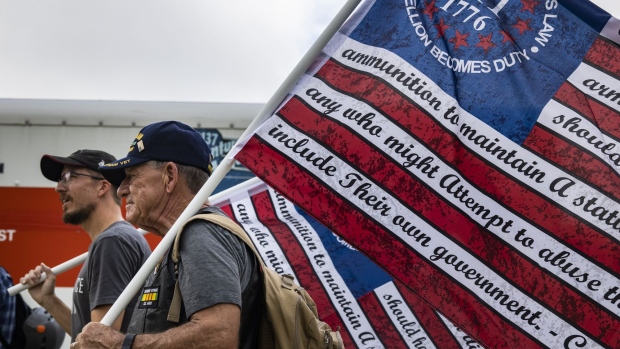 Demonstrators carry Three Percenter flags on the National Mall ahead of the "Justice for J6" rally in Washington, D.C., U.S., on Saturday, Sept. 18, 2021. The protest is being held in support of people arrested in the Jan. 6 insurrection and is orchestrated by a group called Look Ahead America, directed by Matt Braynard, who was part of the data team early in Trump’s 2016 presidential campaign. , Bloomberg

(Bloomberg) -- Several hundred supporters of Donald Trump demonstrated in Washington on Saturday amid a heavy police presence, protesting against the prosecutions of people who stormed the Capitol on Jan. 6.

Saturday’s event near the Capitol was much different than the rally-turned-riot in January, which was fueled by Trump’s false claims that his defeat by President Joe Biden in last year’s election was based on massive vote fraud.

Capitol Police patrolled several rows of crowd-control fencing. The National Guard was on standby in case the protest approached anything like the hand-to-hand combat on Jan. 6, when a much larger crowd overwhelmed police and stormed the seat of the U.S. government during a session of Congress.

Authorities were intent on taking no chances, reinstalling fencing around the Capitol ahead of the rally. Most U.S. lawmakers aren’t in Washington this weekend. Federal prosecutors have charged more than 600 people with participating in the riot and the Capitol invasion.

About 300 protesters were gathered on Saturday, according to an official familiar with security estimates, for an event permitted for 700 people. Several waved flags adorned with militia symbols and slogans.

Speakers said they condemn violence and asked protesters to remain peaceful. Organizers said they were there in support of people charged with non-violent crimes after Jan. 6, not those guilty of violence. People in the crowd yelled “Let them go!”

One woman, who said she was from the Maryland suburbs of Washington, carried an upside-down American flag and shouted profanities aimed at House Speaker Nancy Pelosi.

The sparse crowd was met by some counter-protesters before the speakers began. Sitting members of Congress declined invitations to appear on stage, although some House Republicans have expressed solidarity with people who were indicted for their participation in the Jan. 6 riot.