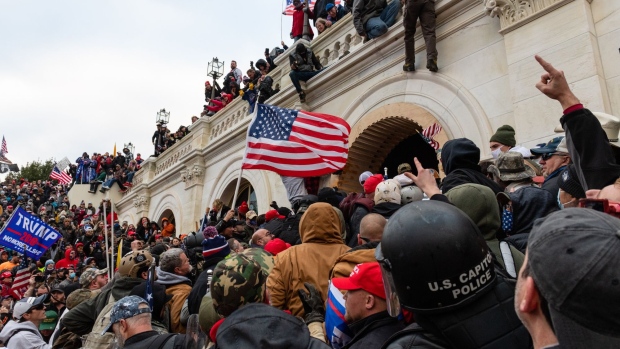 Demonstrators attempt to enter the U.S. Capitol building during a protest in Washington, D.C., U.S., on Wednesday, Jan. 6, 2021. The U.S. Capitol was placed under lockdown and Vice President Mike Pence left the floor of Congress as hundreds of Demonstrators swarmed past barricades surrounding the building where lawmakers were debating Joe Biden's victory in the Electoral College. Photographer: Eric Lee/Bloomberg , Bloomberg

(Bloomberg) -- The House panel investigating the Jan. 6 insurrection at the U.S. Capitol has subpoenaed a retired Army colonel who circulated a conspiracy-packed PowerPoint on overturning the 2020 election.

That presentation by Phil Waldron ultimately found its way to then- President Donald Trump’s top aides. Waldron also briefed some lawmakers on the eve of the riot.

The committee wants Waldron to turn over documents by Jan. 10 and appear for a closed-door deposition on Jan. 17. He would face questions about his briefing entitled: “Election Fraud, Foreign Interference & Options for JAN 6”.

Trump’s last White House chief of staff, Mark Meadows, was among those who received a Jan. 5 email regarding that briefing. Waldron has claimed in published interviews he met with Meadows multiple times after the election, including at the White House.

“Mr. Waldron reportedly played a role in promoting claims of election fraud and circulating potential strategies for challenging results of the 2020 election,” Representative Bennie Thompson, the Mississippi Democrat who chairs the committee, said in a statement.

Waldron previously made news for his involvement in various state efforts to overturn the 2020 election results and as an advocate for election audits. He testified as an expert data witness for Rudy Giuliani, a lawyer for Trump, during hearings in Georgia and Michigan.

The Detroit News reported that on Dec. 4, 2020, Giuliani presented Waldron as a data expert, who during a state Senate hearing “repeated widely debunked statements about Michigan’s election results, which were certified by bipartisan boards in all 83 counties.”

The existence of Waldron’s PowerPoint became public when it was referenced in a Dec. 7 letter from Thompson to Meadows’ lawyer. Thompson told the lawyer, George Terwilliger III, that the Jan. 6 committee was set to advance contempt of Congress proceedings because of Meadows’ refusal to testify under subpoena.

The committee made good on that warning, and the full House Tuesday voted largely along party lines to hold Meadows in criminal contempt and refer the matter to the Justice Department for prosecution.

In his letter to Terwilliger, Thompson pointed out that Meadows had already provided thousands of texts and emails to the committee, including the PowerPoint.

Copies of the PowerPoint surfaced soon after Thompson’s letter was made public. Waldron acknowledged its authenticity to reporters.

The Washington Post reported that Waldron said he met with Meadows, including in the White House, “maybe eight to 10 times” after the election.

His PowerPoint includes a series of unsupported claims. For instance, alleging China had gained “systematic control” over the election system, and that voting machines were compromised.

It also lists what it declares are “constitutional, legal, feasible, acceptable and suitable” actions for overturning Joe Biden’s election victory. Those include then-Vice President Mike Pence on Jan. 6 invalidating electors, invalidating all electronically-cast ballots, and even declaring a nationwide emergency in which U.S. Marshals and National Guard troops were to secure and count paper ballots in states.

In fact, a series of ballot recounts and court actions in several states have found no evidence of significant election fraud in the 2020 presidential election.

A letter explaining the subpoena to Waldron from Thompson also pointed to reporting that Waldron participated in meetings at the Willard Hotel in early January 2021, “gathering purported evidence of election fraud.”