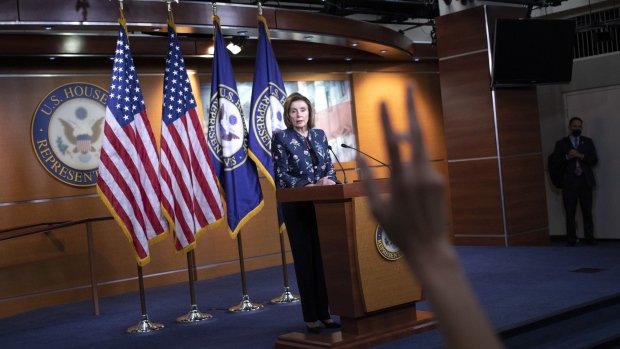 (Bloomberg) -- Seven House Democrats and two Republicans on Tuesday launch what they say will be the fullest investigation yet of the Jan. 6 insurrection at the U.S. Capitol, an inquiry that could drag the issue into next year’s midterm election campaign.

House Speaker Nancy Pelosi hand-picked all of the members of the new committee, including Republicans Liz Cheney of Wyoming, who was ousted as her party’s No. 3 leader over her criticism of former President Donald Trump, and Adam Kinzinger of Illinois. Four other seats reserved for Republicans are empty, in a stand-off with House GOP leader Kevin McCarthy after Pelosi vetoed of two of his appointees.

“For months, lies and conspiracy theories have been spread, threatening our self-governance,” Kinzinger said Sunday as he accepted Pelosi’s offer to serve on the panel. “The American people deserve transparency and truth on how and why thousands showed up to attack our democracy, and ultimately, what led to the insurrection at the U.S. Capitol.”

The committee’s first public hearing is scheduled to begin at 9:30 a.m. Washington time on Tuesday and will hear with testimony from four of the police officers overrun by the mob of Trump supporters seeking to disrupt certification of the electoral votes from the 2020 presidential election. The panel hasn’t announced how many future hearings will be held nor when it will conclude, raising the prospect of the inquiry continuing while both parties are preparing for the 2022 elections to decide control of the House and Senate.

Pelosi’s power play in rejecting two Republican selections drew accusations that she was acting for political reasons from McCarthy, who opposed the committee’s creation and a proposal for a bipartisan independent commission modeled largely on the panel that investigated the 9/11 attacks.

“In the history of Congress never has a speaker done that,” McCarthy told reporters Monday. “She’s broken Congress. Then it just makes the whole committee a sham and the outcome predetermined.”

Republicans have sought to frame the select committee’s investigation as an attempt by Democrats to score political points.“I think it’s tainted from the outset,” said former Florida GOP Representative Dennis Ross, who served in Congress from 2011 through 2019, and is now the director of the American Center for Political Leadership at Southeastern University in Lakeland.

Virginia Democratic Representative Gerry Connolly said Pelosi had wanted an outside commission but was blocked by Senate Republicans.

“It is Republicans who decided to put partisanship ahead of the fact-finding, and to deep-six an independent commission,” Connolly said.

He said he has “every confidence” the committee can investigate fairly and aggressively to answer lingering questions from that day.

People on both sides say there is plenty left to investigate, even if they differ on what. Supporters of the committee say it use its subpoena power and take as long as needed to complete its work.

The two officers from the U.S. Capitol Police force and two from D.C. Metropolitan Police set to testify will talk mostly about their experiences on the front lines. “Some of the testimony will be quite disturbing but the public needs to hear it,” says Mark Zaid, a lawyer for the two Capitol Police officers scheduled to testify.

The committee ultimately plans to explore questions raised about intelligence failures and flaws within the Capitol Police and throughout the federal government that may have led to security missteps before and during the attack.

Details of the potential role of Trump himself in sparking the insurrection, as well as questions about the failure of the Congress to prepare adequate security, are on the table.

Democrat Connolly concedes the panel, with its lopsided roster, can’t be shielded from partisan attacks on its legitimacy. He’s among those who wanted a presidential-appointed commission that would take Congress completely out the process.

Ross said Pelosi’s refusal last week to seat GOP Representatives Jim Banks of Indiana and Jim Jordan of Ohio, both of whom have continued to support Trump, who continues to make false claims of election fraud, opened the door to a defensible Republican boycott.

“Pelosi gave herself veto authority and exercised it, and I think Kevin had no choice but to do what he did,” Ross said. “Sure, Jordan and Banks could have been disruptive and controversial, but she still had the majority and the votes.”

Pelosi’s critics suggest she wanted the ability to launch an investigation unfettered by Republicans. With no deadline to complete its work, critics say the committee is a Democratic platform for reinforcing their insurrection narratives heading into the 2022 midterm elections.

“In a House with one of the smallest majorities in history, Pelosi has dismissed minority rights at every juncture,” said Jonathan Turley, a George Washington University law professor, who has testified to Congress and advised House Republicans on legal issues, including Trump impeachments. “These committees can bring either resolution or division depending on their makeup and mission.”

Pelosi’s selection of Cheney and Kinzinger gives a veneer of bipartisanship, even if both Republicans have sharp differences with the House GOP leadership.

Cheney said she is confident the panel “will have a non-partisan investigation, that it will look at the facts, that it will go wherever the facts may lead.” Bennie Thompson, the chairman, has made similar promises. Cheney will give one of the opening statements Tuesday’s hearing.