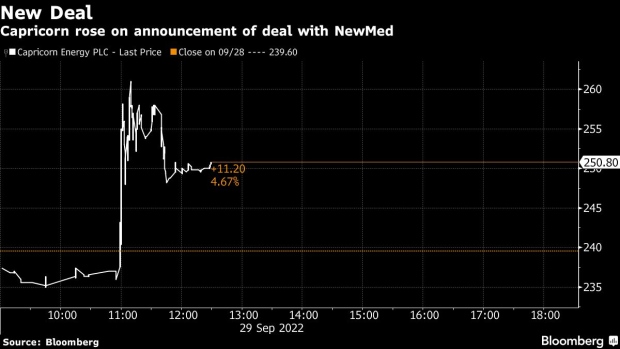 “The board has engaged in a robust and dynamic process to evaluate options for Capricorn and considered a broad range of external factors and market conditions,” Nicoletta Giadrossi, chair of Capricorn, said. “We believe this is a compelling transaction which combines near-term value realization with ongoing participation and value creation in a world-class gas company.”

Capricorn’s board of directors plans to unanimously recommend the deal with NewMed and unanimously decided to withdraw from the merger with Tullow.

Shares in Capricorn jumped as much as 8.9% in London, with Tullow falling as much as 5.5% after the announcement. A Tullow spokesman declined to comment.

Africa-focused Tullow announced a merger with Capricorn in June, a deal that would have created a $1.9 billion energy firm with assets spread from Ghana to Egypt. Questions followed soon after over the value of the combination.

More than a quarter of Capricorn’s shareholders last month said a proposed merger with Tullow lacked merit, undervalued the company, and that they would vote against the transaction. Tullow Chief Executive Officer Rahul Dhir, who was set to lead the group, continued to promote the merger as recently as two weeks ago, despite the opposition.

The new tie-up will combine NewMed, one of the largest gas producers in the Mediterranean, with Capricorn’s portfolio of production and exploration in countries including the UK, Egypt, Mexico and Suriname. The deal will create a “gas and energy champion” in the Middle East and North Africa, the companies said.

“We have a shared vision on a disciplined capital allocation framework,” NewMed CEO Yossi Abu said in the statement. The company aims to “significantly increase our production while expanding to the LNG market with the aim of supplying Europe’s growing gas demand.”

Both Capricorn and NewMed shareholders will need to approve the deal at respective general meetings.