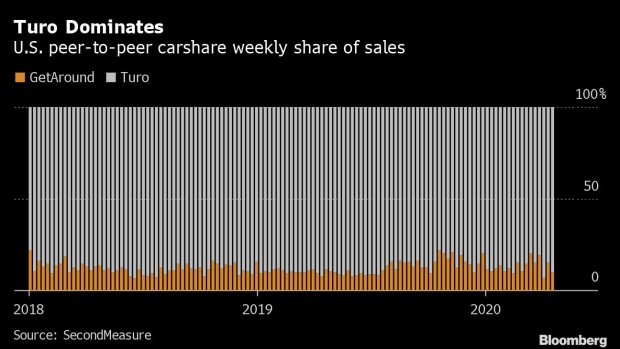 (Bloomberg) -- Car-sharing platforms, which have suffered during the Covid-19 lockdown, see an opportunity emerging: an increase in short-distance, local trips as U.S. consumers look for a different way of getting to work and running errands.

Executives from Turo, GetAround and ZipCar are hoping their pitch to customers—a means of travel that is cheaper than car ownership and sanitary—will also win business from public transit users and Uber and Lyft riders.

In addition to the uptick in shorter trips, the companies also report increased use by essential workers and health-care workers. “Customer confidence in travel safety can change their booking habits,” said Preeti Wadhwani, a research analyst with Global Market Insights. “Health-care providers or first responders are relying on car-sharing companies such as Turo to commute to work.”

GetAround says overall trip volume in the U.S. has declined by almost 50% since states began shutting down their economies in mid-March. Turo says its business also has fallen dramatically, undoing the 60% year-on-year growth they saw as recently as February, according to Chief Executive Officer Andre Haddad. Zipcar also reports an “expected decline in demand,” particularly in business travel and on university campuses, Zipcar President Tracey Zhen said in an email.

The declines are in line with changes in traffic and transportation patterns over the past three months, given the lockdowns and work-from-home directives. The most widely used transit systems in the U.S. are carrying 40% fewer riders than usual, according to the American Public Transportation Association. Uber and Lyft reported dramatic declines in riders in March and April.

Hyperdrive spoke to executives at Turo, GetAround and Zipcar, as well as industry analysts, to asses the prospects for different car-sharing models in a Covid-19 world. Sanitation has been a focus for all three businesses, which have updated their protocols and issued new guidelines for users. The pandemic has already claimed Maven, the car-sharing operation owned by General Motors. The service was permanently discontinued on April 21.PEER-TO-PEER / TUROFounded: 2009, San Francisco

How it works:  Privately owned vehicles (Turo doesn’t own the fleet) are available to drivers via an online marketplace and mobile app that connect vehicle owners with prospective users. Users choose a vehicle, based on location and price. Contactless pickup, unlock and drop-off options are available but not standard. Pricing is set by the owner with input from Turo, which takes a cut. There is no membership or subscription fee.

The revised sell:  The company has started sending sanitation kits to its most active car hosts. It’s also partnering with third-party cleaning services across the U.S., offering discounts of up to 50% so owners can have their vehicles professionally cleaned between trips. Turo is now offering a flexible cancellation or vehicle-change policy if users are concerned about sanitation.

“The resilience of the local part of the business is great,” said CEO Haddad. “We see—once the orders are lifted and people can start taking non-essential trips—we see car travel to be a positive in the next six to 12 months in the new normal.” The company is reporting a rebound in bookings in markets where stay-at-home orders are being relaxed.

Hurdles: Cost-effectiveness for renters versus other modes of transport and competition from traditional car-rental companies. Cleaning is ultimately at the discretion of car owners and users after trips. TuroGo, offering contactless, mobile pickup, is a newer, optional feature.

What the experts say:GMI’s Wadhwani: “The peer-to-peer business has high risks and low interest.”

LMC Automotive President Jeff Schuster (via email): “I do wonder if consumers will avoid car sharing in addition to public transit and ride-sharing. Prospects are certainly brighter than for ride-sharing.”PEER-TO-PEER/GETAROUNDFounded: 2009, San Francisco

How it works:  Similar to Turo, car owners list their vehicle on GetAround’s online marketplace. Users can select a vehicle through the mobile app. The company uses a dynamic pricing model, meaning rates go up when demand is high. Trips start at around $4 per hour, from which GetAround takes a cut. There is no membership or subscription fee.

Footprint: GetAround is a smaller player in the U.S, operating in around 100 cities; its international footprint, especially in Europe, is bigger. The platform has 6 million global users. It was first among peer-to-peer car-sharing companies to offer mobile unlock and contactless pickup of cars.

The new sell:  GetAround has waived cancellation fees, made discounts available for health-care workers, and updated its cleaning guidance for users and hosts who list their vehicles on the platform. That includes quarantining vehicles from the platform that are known to have come in contact with coronavirus and requiring the cars to be sanitized before they can be listed again on the platform. GetAround says the strength of its local business indicates consumers will want “assurance they can travel as much as possible alone, or within the six-feet social-distancing recommendations of various federal or state authorities,” CEO Sam Zaid said. “People prefer that over ride-sharing and public transit because you don't have to interact with people.”

Hurdles:  Cleaning is ultimately at the discretion of car owners. GetAround has a smaller pool of vehicles in the U.S.; at 100,000, its global fleet size is also significantly smaller than Turo’s.What the experts say:

David Zipper, a Harvard Kennedy School visiting fellow: “I don't see car-share becoming a general substitute for public transit, given the relatively modest size of car-share fleets. It seems unrealistic to expect the sector to move more than a tiny fraction of traditional transit riders, even in the best of circumstances.”

Truck Venture Capital managing partner Reilly Brennan: “Distributed car-sharing is emerging as the surviving model. Coming out of the pandemic, I can see these services getting stronger, not weaker.”

Founded:  2000, Cambridge, MassachusettsHow it works: Users can book an hourly or daily trip for a car near them, using the Zipcar app. Zipcars are parked in dedicated parking spots. A car is unlocked by using the app or, as a backup, via a microchipped card. Prices in some cities start at $5 per hour (for local or promotional bookings). The price includes gas, parking, tolls, insurance and maintenance.

The footprint:  Zipcar, which is owned by Avis Budget Group Inc., owns and rents 12,000 cars across 500 cities. These are mostly located in the United States and Canada, with a small footprint in other areas like the U.K. and single cities in other countries.

The new sell: Zipcar is offering a 50% discount on rates and exclusive access to the same vehicle for 5 or 7 days, which could make it a more attractive proposition versus car ownership, or even shared and public transit. It has waived cancellation fees temporarily and also launched an instant signup process; prospective users can get verified through the app via their driving license. The fleet size can be increased, given that it has access to Avis’s larger fleet of rental cars.

“We can anticipate urbanites still wanting affordable access to a vehicle and potentially traveling alone or in smaller groups when they may have done otherwise,” Zipcar President Tracey Zhen said in an email to Bloomberg.

Hurdles: Zipcar requires users to pay a monthly or annual subscription fee in addition to the hourly rates. The car can also be used by multiple users in a single day. “You’re probably going to have to disinfect more regularly,” according to Pitchbook’s Hussain, adding that Zipcar therefore faces an increase in existing costs for maintenance, as well as additional cleaning costs because it owns its cars.

What the experts say: BloombergNEF Analyst Andrew Grant said: Zipcar's access to Avis's resources "doesn't seem like it would help them much in this situation, as the rental business faces equal challenges.”University of California, Berkeley, Transportation Sustainability Research Center Co-director Susan A. Shaheen: “B2C carsharing could also be an attractive option for individuals seeking access to vehicles that have more standardized cleaning protocols in contrast to relying on individual P2P vehicle owners to clean their vehicle between uses.”

FLEET-BASED/MAVENNOTE: General Motors announced on April 21 that it would permanently discontinue its Maven car-sharing service.

How it worked: The Maven app allowed users to rent new General Motors models or peer-owned vehicles for hourly or daily use. The app would unlock and remotely start the vehicle for the user.

Advantages: The service included the cost of insurance and fuel. The vehicles available had to be newer models.

Concerns: Maven experienced low usage rates and high upkeep costs. The total fleet-based car-sharing fleet in the U.S. will shrink by around 19% with GM's shut down of Maven, according to BloombergNEF. What the experts say: Truck Venture Capital Managing Partner Reilly Brennan said in a newsletter on April 27: “Considering Maven’s high costs for operations (service, cleaning, parking) and primarily hourly revenue model, it does appear peer-2-peer networks like Turo are structurally advantaged, with their distributed supply (no direct parking or ops costs) and daily revenue model.”Questions remain:Car-sharing companies also face a challenge from their traditional target: car ownership. Fear of Covid-19 spikes in the months ahead could tip the scales in favor of car buying over sharing someone else's ride. Plus, a recession could well mean fewer new cars will be rented out on sharing platforms. “Structurally, as new car sales decline this year and stay fairly depressed next year, there will be fewer new cars on the platforms, making them less attractive,” BloombergNEF analyst Andrew Grant said. (Newer cars are more popular with users of car-sharing platforms.)

GetAround and Turo still expect an increasing number of people to list their vehicles on car-sharing platforms in the months ahead. In a troubled economy, car-owners could look to car-sharing platforms to help cover payments with the additional income.Ultimately, can the industry convert a short-term change caused by the pandemic into a sustainable source of longer-term sales? Pitchbook Analyst Asad Hussain said he believes the companies are facing a longer-term threat to their models. “It doesn't make financial sense to rent a car on an ongoing basis,” he said. “It makes more sense to buy or finance a car. You could see more people gravitate back to ownership.”