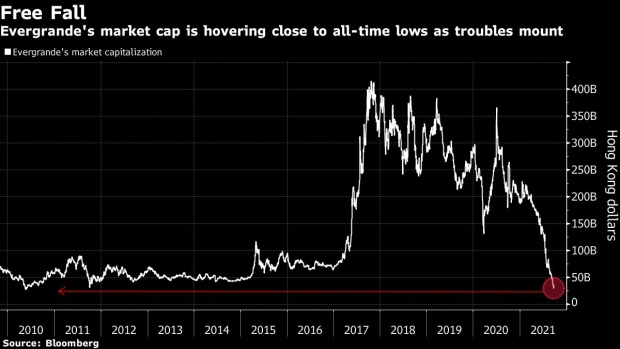 (Bloomberg) -- China Evergrande Group’s electric-car unit scrapped plans for a share listing amid what it said is a “serious shortage of funds,” adding to liquidity concerns for the business empire of the world’s most indebted property developer. The unit’s shares plunged as much as 26%.

Financial markets will continue to scrutinize developments in Evergrande’s debt crisis this week, especially whether Beijing will intervene to prevent a disorderly collapse of the firm. Evergrande’s 8.25% bond due 2022 was indicated down 0.5 cent on the dollar at 28.4 cents as of around 9:30 a.m. in Hong Kong, according to Bloomberg-compiled prices. Moves in China’s equity markets last week suggested investors there are less concerned the firm’s woes will spark a wider financial meltdown.

Tens of thousands of Chinese households face risks after Evergrande missed payments on investment funds sold through shadow banks, which have funneled billions into its construction projects.

The impact from an Evergrande credit event on rated Chinese construction issuers will be manageable because they have limited exposure to the developer, Fitch Ratings said in statement.

DBS Group Holdings Ltd. has no exposure to Evergrande and doesn’t see the developer’s crisis as a systemic risk to the region’s banking industry, its chief executive officer said Monday.

In a sign of the stresses mounting among developers, Sunac China Holdings Ltd. has asked for support from local authorities, saying tighter housing measures have crushed sentiment in the market.

The Hong Kong-listed real estate firm made the plea to the city of Shaoxing after housing curbs there hurt sales at one of its projects, according to a letter from a subsidiary seen by Bloomberg. The market is almost frozen, the company said in the document. “We face huge pressure.”

The Sunac group as a whole has also “run into big hurdles and difficulties in terms of cash flow and liquidity,” it said. Sunac’s dollar bonds slumped on Friday after the letter circulated among credit traders.

Tens of thousands of Chinese households risk being sucked into the spectacular unraveling of Evergrande after the developer missed the payments on funds sold through non-bank lenders.

Some of these lenders, known as trusts, have already dipped into their own pockets to repay wealthy investors on Evergrande’s behalf, according to people familiar with the matter. Others are negotiating payment extensions with Evergrande, said the people, asking not to be identified discussing private matters. It’s not clear how much of the funds are in arrears and there’s no evidence that trusts are passing payment delays on to customers who bought fixed-income products tied to Evergrande.

Evergrande’s electric-car unit will not proceed with its proposed issue of yuan-denominated shares on the Science and Technology Innovation Board of the Shanghai Stock Exchange, according to a filing to the Hong Kong stock exchange.

The company said late Friday that it “is encountering a serious shortage of funds” and “has suspended paying some of its operating expenses and some suppliers have suspended supplying for projects.” The company said it couldn’t guarantee that it can meet its financial obligations as it keeps hunting for strategic investors.

Funds including Boaz Weinstein’s Saba Capital Management and Ruben Kliksberg’s Redwood Capital Management began to build positions in the company’s bonds, while European banks assured investors that they have limited exposure to the troubled developer. Other big-name credit investors had exposure to the company before its latest woes, with some opting to hold on to large chunks of their positions. The list doesn’t represent a comprehensive or real-time picture of debt holders.