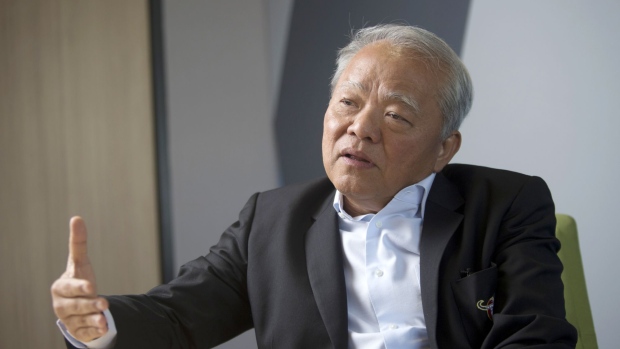 Billionaire Sathien Setthasit, chairman of Carabao Group Pcl, poses for a photograph after an interview in Bangkok, Thailand, on Wednesday, Nov. 29, 2017. Sathien plans to pour $300 million into helping his energy-drink company Carabao take on Red Bull in China. A recent slide in the firm's shares signals investors see a tough fight ahead. , Bloomberg

(Bloomberg) -- CJ Express Group Co., a retail chain founded by energy drink tycoon Sathien Setthasit, is considering an initial public offering in Bangkok to raise at least $500 million, according to people familiar with the matter.

The Thai supermarket company whose biggest shareholder is also Carabao Group Pcl’s chief executive officer is working with advisers on an offering that could take place as soon as next year, the people said, asking not to be identified as the information is private. CJ Express’s IPO could raise $500 million to $800 million, one of the people said.

Discussions are ongoing and details of the potential offering such as size and timing could change, the people said. A representative for CJ Express didn’t respond to requests for comment.

First-time share sales in Thailand have proved relatively resilient amid a global slowdown in capital raising, with firms raising nearly $4 billion so far this year, effectively flat versus the same period in 2021, data compiled by Bloomberg show. Global IPO volumes have fallen nearly 70% year on year, due to factors including rising rates and geopolitical tensions.

Pet food maker I-Tail Corp. is expected to list this month in Bangkok and could be Thailand’s second-largest IPO this year, after Thai Life Insurance Pcl’s June listing raised about $1 billion.

CJ Express was established in 2005 and operates supermarkets as well as other retail outlets, according to the company’s website. As of Nov. 30, the company has about 900 branches in 40 provinces nationwide, and plans to expand to the other 37 provinces.

Big C Supercenter Pcl, which runs supermarkets and convenience stores in Southeast Asia, is also considering going public in the country next year through an offering that could raise more than $500 million, Bloomberg News has reported.