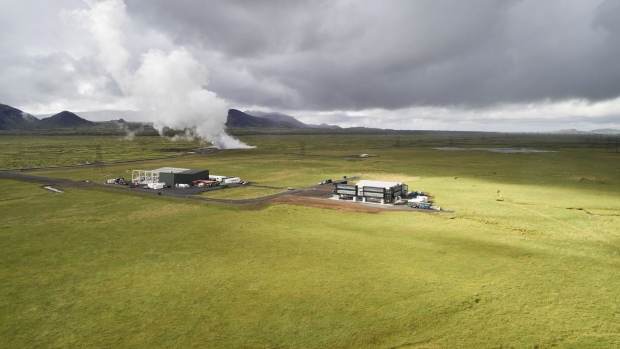 The 'Orca' direct air capture and storage facility, operated by Climeworks AG, in Hellisheidi, Iceland, on Tuesday, Sept. 7, 2021. Startups Climeworks and Carbfix are working together to store carbon dioxide removed from the air deep underground to reverse some of the damage CO2 emissions are doing to the planet. , Bloomberg

Decarbonization of the global economy will require a planet-sized transformation of industrial sectors and of consumption. There is a limit to what we can do, however. Reaching net zero emissions will almost certainly require actively removing carbon dioxide from the atmosphere.

Measuring carbon and pricing it will be just as important. An increasingly complex set of initiatives, frameworks, regulations and policies will set prices, which will in turn inform the total supply of carbon offsets in the market. New research from BloombergNEF points to the ways in which markets for carbon offsets could evolve through the middle of this century, with very different outcomes.

Getting there could take three forms. The first is avoluntary market scenario, largely an extension of rapidly growing offsets trading that exists today in 120 markets. Almost 90% of current supply comes from so-called “nature-based solutions” and energy related projects. While this market has many sets of standards and guidelines, it is not regulated. Companies can purchase any type of offset from any existing project in any market in the world — it doesn’t need to correlate with a company’s emissions or where it’s located.

Without regulation, many companies purchasing credits in bulk for as cheap as they can find, be it from large hydropower projects in India or natural gas plants in China. Relatedly, and just as importantly, there is varying quality of offsets — in terms of what activity qualifies, how well that activity is measured and logged, and how long carbon is actually stored thanks to these projects.

BNEF models out what a voluntary market scenario would look like by mid-century. There would be a great deal of supply of offsets, as well as a lot of low-quality offsets. An over-supplied, dubious-quality global market would unsurprisingly have something of a legitimacy problem too, as both proponents and potential opponents clearly identify issues.

The second scenario BNEF looks at is a so-called removals scenario, which only allows companies to purchase credits from the removal of CO₂ in order to hit their sustainability targets. While many groups are pushing for a heavier emphasis on removals, no voice is louder in this debate than the Science-Based Targets initiative, which has companies set Paris Agreement-aligned emission reduction targets. Effectively, this scenario restricts supply of offsets to projects that store or sequester carbon at levels that would not otherwise occur.

This condition necessarily limits the set of technologies and solutions which can deliver offsets. It allows nature-based solutions such as reforestation and afforestation and necessitates direct air capture technologies that pull CO₂ from the ambient atmosphere. In this scenario, supply is quite constrained, and market liquidity is low.

Not surprisingly, these two scenarios result in very different potential prices for carbon offsets. An over-supplied, lax voluntary market results in very slow growth in prices, with a liftoff only in the late 2040s. The carbon removals-only scenario has an immediate spike in prices to more than $200 a ton, before eventually reaching a plateau above $100 a ton by mid-century. BloombergNEF modeled a hybrid scenario as well, which combines the two and shifts the removals-only scenario pricing shape to 2030 with a similar decline over time.

These two very different visions of the future of offsets imply more than just demand, supply and price action. In a voluntary only market, prices are too low to fundamentally change industrial behavior. Conversely, a removals-only market with prices above $200 a ton is functionally indistinguishable from a tax or price on carbon, which would certainly change industrial behavior and create new winners (as well as losers) in the race to deeply decarbonize.

As ever, all models of this duration will prove to be off the mark in currently unpredictable ways. However, 2022 conclusions about the market in 2050 are nonetheless useful for planners and builders — and they just might encourage smart, useful policymaking as well.