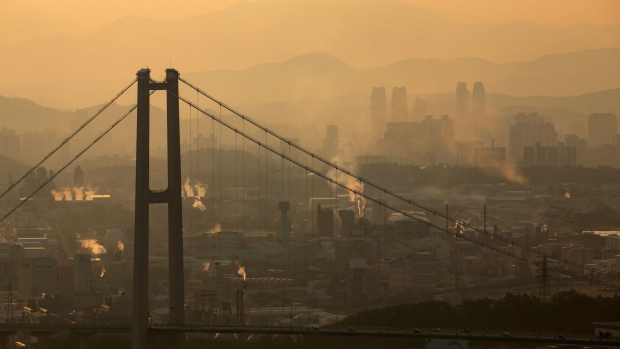 Smoke billows from an industrial complex beyond the Ulsan Harbor Bridge at dusk in Ulsan, South Korea, on Sunday, Aug. 4, 2019. Ulsan is known as Hyundai Town, an industrial powerhouse with the world’s largest car-assembly plant, its third-biggest oil refinery and the giant shipyards. Since 2016, some 35,000 workers quit or lost their jobs at the city's shipyard, in a downturn as dramatic as it was sudden. , Bloomberg

(Bloomberg) -- More Asian governments are putting prices on emissions to try and curb global warming, but the region’s carbon markets and taxes are mostly off to slow and disappointing starts.

Carbon prices in China and South Korea are at just fractions of where they are in the European Union and also well below levels estimated to have a meaningful impact on the climate, while taxes in Japan and Singapore have been set at very low levels. That suggests these markets -- at least at their current trajectories -- aren’t going to be sufficient to change the behavior of polluting industries or help countries reach their net zero goals.

Read more: Sink or Swim -- Carbon Markets Must Expand to Be Impactful: BNEF

Asia is struggling to adopt ambitious pollution pricing instruments, especially at a time of soaring inflation, rising energy prices and economic instability. Carbon pricing is one of the most powerful tools to put economies on low-emission paths, but price signals must be sustained, strengthened, and extended to a greater portion of global emissions, the World Bank said in May.

Asia's carbon markets lack tough regulations, "which means they are unable to give right signals that lead to emission reductions," said Youn Sejong, a director at Plan 1.5, a Seoul-based climate advocacy organization. "Markets will only function well once tighter limits are imposed on pollution levels, raising prices and creating urgency among companies to curb emissions and demand for credits"

Chinese carbon prices peaked at around $9 a ton early this year, while those in South Korea aren’t that much higher. Only New Zealand is anywhere near the $80-plus a ton level in Europe, the most liquid carbon market.Some 46 countries worldwide are now pricing carbon through trading schemes or taxes, covering around a third of emissions, according to the International Monetary Fund. The current average price of $6 a ton of carbon-dioxide equivalent needs to rise to $75 by 2030 to effectively limit global warming, the multilateral lender said. Here’s a round-up of the progress so far in Asia.

China, the world’s largest emitter, launched its emissions trading scheme in the middle of last year. The initial focus is on more than 2,200 electricity generators that account for about 40% of the country’s emissions, with steel, cement, aluminum and petrochemical producers next in line to join.

Trading in what’s the world’s biggest market by emissions covered has been lackluster, however, and there have been delays in adding new industries as well as data collection problems. Beijing seems to be trying to strike a balance between its environmental and economic goals by prioritizing participation in the ETS over more stringent goals on reducing emissions, with energy shortages last year also spurring authorities to relax curbs on fossil fuels.

South Korea introduced a national ETS in 2015, and it has since expanded to cover 74% of domestic emissions across industries including power, transport, aviation, construction and waste management. The carbon price remains relatively low, at 28,000 won ($21.57) per ton of carbon dioxide equivalent, around a quarter of the level in Europe. Only 10% of allocated carbon credits will be auctioned between 2021 and 2025, meaning the rest will be given out to companies for free.

New Zealand launched an ETS in 2008, with major reforms made to it last year. Those included a new cap on unit supply and the introduction of an auction mechanism. Auctions started in March 2021, with as many as 26.3 million allowances made available for this year. Agriculture, a major sector for emissions in the country, is still not covered, however. The nation’s carbon price is the highest in Asia, at NZ$83.32 ($52.39).

Japan was the first Asian country to impose a national carbon tax, in 2012, but it’s set at just 289 yen ($2.17) per ton of CO2-equivalent. The environment ministry had requested the introduction of a much higher levy, but the government backed away from the proposal amid industry protests. Japan also has subnational emissions trading systems for Tokyo and Saitama prefectures.

Singapore introduced a carbon tax, set at S$5 ($3.62) per ton of CO2-equivalent, in 2019. It’s planning to raise it to $25 in 2024, and then lift it gradually to $50 to $80 by the end of the decade. The government also allows companies to use high-quality international carbon credits to offset up to 5% of their taxable emissions.

Indonesia had planned to introduce a carbon tax of 30,000 rupiah ($2.01) per ton of CO2-equivalent on coal-fired power plants that generate about 70% of the country’s electricity from April. The levy was delayed, with a government official saying in June that was to protect the economy from rising fuel and food prices. Jakarta has pledged to go ahead with the tax before the end of the year and is also working on a proposal to price the cost of building out renewable power capacity to replace coal plants.

Australia has the Emissions Reduction Fund, a voluntary system that involves the state buying carbon credit units through reverse auctions largely from sequestration projects. The Labor government, which came to power in May after a climate-focused election, sees enormous potential for carbon markets and has announced an independent review of the current system due to concerns over its integrity.Andrew Macintosh, a former chairman of the country’s Emissions Reduction Assurance Committee, said in March that as many as 80% of carbon credits issued under the voluntary system didn’t offer genuine or additional abatement of greenhouse gas emissions. Australia previously had a national carbon pricing market, which started in 2012 but was abolished two years later.

India, the world’s third-largest emitter, is planning a carbon trading market that would cover the energy, steel and cement industries, according to people with knowledge of the plan. It could be officially announced on Independence Day on Aug. 15, and a detailed plan is likely to be ready in the fourth quarter, the people said.

Elsewhere in Asia, Thailand, Vietnam, Malaysia and Pakistan have some form of carbon pricing planned or under consideration, according to the IMF.