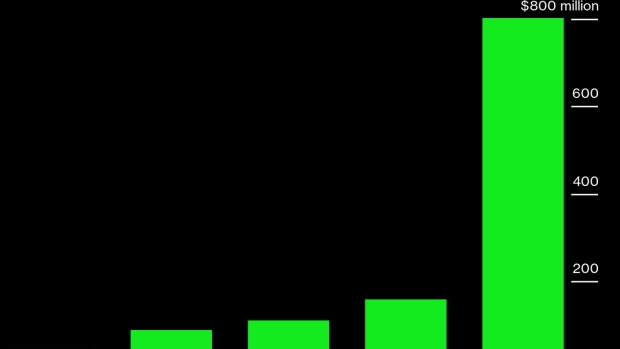 Workers on the floating solar farm at the Sirindhorn Dam, a hydro-floating solar hybrid project run by Electricity Generating Authority of Thailand (EGAT), on the Lam Dom Noi River in Sirindhorn District, Ubon Ratchathani, Thailand, on Tuesday, Nov. 2, 2021. While Thailand's emissions are relatively small -- pledges of developing economies are key with their growing energy consumption in the years to come -- the country's prime minister raised the ambition of their net-zero targets at the COP26 climate summit stating Thailand would aim to reach carbon neutrality by 2050. , Photographer: Nicolas Axelrod/Bloomberg

The United Nations Intergovernmental Panel on Climate Change’s latest report sent a stark alert about the world’s current emissions and temperature trajectory. Within the document is a complex chart that maps out dozens of technologies or practices which can reduce emissions, their potential to do so this decade, and the economics of deploying them.

The charts are color-coded. Anything blue is cost-competitive today; anything in the range from light orange to dark red indicates a need for investment beyond business as usual. Wind and solar energy are winners in terms of cost and scale, with gigatons of potential emissions reduction per year. So too are a half-dozen transportation approaches. Industrial measures  have significant potential, but carry a high cost. Building applications, in particular energy services and lighting, are in the money but others such as the rather broad “improvement of existing building stock” are not.

At the bottom of the energy section is a small (in terms of 2030 potential) and angry (in its bright red colors) bar for carbon capture and storage. It has limited emissions potential within this decade, and it is expensive.

Just as important as the amount of the investment is the size of main investors. Partners Group AG manages $127 billion; Baillie Gifford, more than $450 billion as of December 2021; GIC, Singapore’s sovereign fund, an estimated $700 billion-plus — all told, well over $1 trillion dollars under management. The commitment to carbon removal more broadly is significant.

The vice-chair of the working group which produced this latest IPCC report has said that carbon removal is “essential” to zero out greenhouse gas emissions. But being essential to long-term climate goals does not inherently make a market. A list of investors like the group above does imply there will be a market for carbon removal at scale, even in the absence of any major global policy support.

Also, carbon removal not only has a cost of operation, it is a cost, as Shayle Kann of Energy Impact Partners says. Carbon removal requires capital to build plants and it requires substantial energy to power the removal processes. More than that, though, it provides a societal good but does not provide electrons, or molecules, or services in the way that renewable power or building energy services do.

Capturing carbon dioxide molecules at massive scale, and storing them stably for centuries or longer, is a hard problem to solve. The companies doing carbon removal are what their investors often call “hard tech” —  their work is complex and requires time-consuming hardware and infrastructure (not software and services).  Success will not be quick, and in fact may not come until after the 2030 interval of the IPCC’s report.

In 1976 Amory Lovins, the cofounder and chairman emeritus of energy think tank RMI, wrote a short but significant essay about U.S. energy’s future. In it, he contrasted the current — and expected — system of massive power plants and complex engineering as the “hard path” to the future. The alternative is a “soft path” that relies on “smaller, far simpler supply systems entailing vastly shorter development and construction time, and on smaller, less sophisticated management systems.”

More than four decades later the IPCC is clear that while the soft path is scaling rapidly, the hard path still will be needed to solve hard problems. Technology developers and investors seem to think so too.