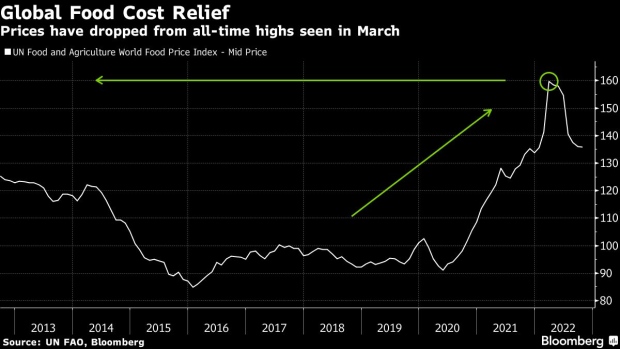 ISTANBUL, TURKEY - OCTOBER 14: Ships, including those carrying grain from Ukraine and awaiting inspections are seen anchored off the Istanbul coastline on October 14, 2022 in Istanbul, Turkey. Under the terms of the Black Sea Grain Initiative, which paved the way for Ukraine to safely ship grain from three key ports, vessels must be inspected by a team of officials from Turkey, Ukraine, Russia and the United Nations the lengthy inspection process has caused a shipping traffic jam, with some ships waiting days at anchor off the Istanbul coast for inspection teams. The Joint Coordination Center (JCC) has increased the number of inspection teams to try to speed up the process and clear the backlog. (Photo by Chris McGrath/Getty Images) , Photographer: Chris McGrath/Getty Images Europe

Shipments are flowing since Russia agreed to renew an agreement to keep export corridors open, Chief Executive Officer David MacLennan said in an interview. The additional shipments are helping push down world food costs, which jumped to a record in March after Russia’s invasion of Ukraine choked off supplies from a key producer.

“We are getting new crop out,” MacLennan, who is stepping down at the end of the year, said at Bloomberg headquarters in New York. “Crops are down, but the good news is products are moving. This is one of the bread baskets of the world. We’ve got to have it.”

Ukraine has shipped some 12.6 million tons of crops through the Black Sea since the United Nations-brokered deal was initially reached in late July, providing a lifeline to the nation’s economy in the midst of the war. The agreement -- renewed in mid-November for an additional 120 days -- has helped push world food prices to the lowest in nine months in October.

Still, the pact mandates that all cargoes be checked by teams in Turkey before and after transiting Ukrainian ports, and exports have recently been slowed by a sluggish inspection pace. Port workers are also facing difficulties including blackouts and having to work at night, MacLennan said.

“The challenge is the working conditions for the port workers and all the infrastructure that goes into getting the crops out,” he said.

Supplies of everything from wheat to corn and sunflower seeds are smaller this year, with Ukraine’s harvest expected to be 60% to 70% compared to previous years, he said. The company also added it’s no longer in control of two of its sunflower crush plants in the country.

In Russia, Cargill said it’s pullback some non-essential businesses, but that it sticks by its decision to keep operating as the country is key to feeding the world.

“There were a lot of voices early on that everybody should get out of Russia,” he said. “Our purpose is to feed people. We did not agree with that. We make food. We feed the people of Russia, and that food also feeds people in the Middle East and Africa. For us to leave, it would’ve been detrimental.”

(Updates with quotes throughout.)