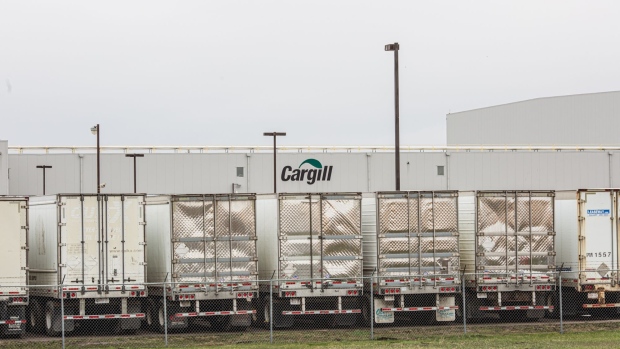 Trailers sit outside the Cargill Inc. beef plant in High River, Alberta, Canada, on Monday, May 4, 2020. The facility, which accounts for about 40% of Canada’s beef processing capacity, resumed work today despite the protests of the the union, which says the facility should remain closed until the company can ensure the safety of workers. , Bloomberg

Beef prices in North America are soaring amid global supply chain snarls, and now a labor dispute could inject even more uncertainty into the market.

A union representing thousands of workers at a Cargill Inc. beef plant in Alberta gave official notice on Wednesday of a strike starting Dec. 6 following two days of negotiations. The strike could take the form of a complete work stoppage or refusal to work overtime or some shifts.

The move comes as beef touches record prices in the northern nation, and it’s the latest example of workers flexing newfound leverage in a company critical to food supply chains. The facility in High River is the largest in the country and accounts for roughly 40 per cent of Canada’s beef processing capacity. If workers strike, Canadian consumers could see a drop in packaged beef on store shelves as well as more “meatflation.” Farmers will also likely have to hold onto their animals longer, which increases production costs.

“We will continue to work towards an agreement by the union’s December 6 strike deadline,” Sullivan said.

The union is discussing other possible actions to accompany a strike, including a boycott of the beef industry.

Meat workers have complained about pandemic health and safety after a COVID-19 outbreak last year sickened half of the plant’s staff and resulted in a temporary shutdown. Meanwhile, a global labor squeeze has strengthened workers’ bargaining power. Businesses are struggling to hire and retain staff as demand swells.

Cargill isn’t alone. Around 10,000 employees at Deere & Co., the world’s biggest tractor maker, have been on strike since mid-October. Workers at four of Kellogg Co.’s plants are also on strike, forcing the company to bring in cereal from abroad to supply the U.S. market.