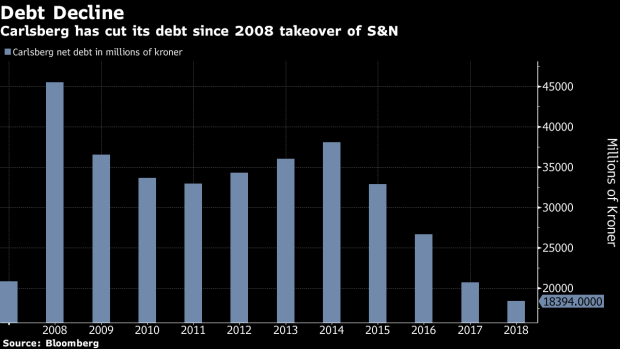 Green bottles of Carlsberg beer move along the production line following the labeling process at the Baltika Breweries LLC plant, operated by Carlsberg A/S, in Saint Petersburg, Russia, on Thursday, May 10, 2018. A slowdown in Russian demand for beer as international sanctions threaten the country's economy is weighing on Danish brewer Carlsberg's sales. Photographer: Andrey Rudakov/Bloomberg , Bloomberg

(Bloomberg) -- The man running Carlsberg A/S says he won’t be “seduced” by negative interest rates as others take advantage of historically cheap credit to pay for expansion.

Cees ’t Hart, the chief executive officer of the Danish brewer, says the worry is that companies that succumb to the temptation to issue debt just because it’s cheap could end up with balance sheets they can’t afford.

“The moment you get seduced by low rates and companies feel like they have to use them to do very big things -- maybe bigger than they can absorb -- they have to remember they all have to pay the bill later,” Hart said in a phone interview.

“There are many companies that have been a lot more aggressive than we have who have then gotten into problems afterwards,” he said.

Globally, almost $17 trillion of bonds now trade at negative yields as investors have fled risk. Nestle SA on Aug. 13 became the first company to have 10-year euro debt yielding below zero. In Carlsberg’s home country of Denmark, which has the world’s largest covered-bond market, a bank made history this month when it offered the first ever 10-year mortgage at a negative rate.

Since Hart joined Carlsberg in 2015, the company has focused on cutting its debt and reducing costs, a strategy that has included abstaining from major acquisitions. Meanwhile, competitors like Anheuser-Busch InBev NV have gained market share after a series of big takeovers over the past decade. The last time Carlsberg spent a large sum on a takeover was when it bought Scottish & Newcastle Plc in 2008 for roughly $8.5 billion, under Hart’s predecessor.

“Carlsberg has lowered its leverage significantly in recent years,” Brian Borsting, a credit analyst at Danske Bank, said in a note. The brewer’s decision last week to extend its share buyback program is “slightly credit negative” but it also “indicates that Carlsberg doesn’t plan larger bolt-on acquisitions near term,” he said.

While Hart won’t pursue large takeovers at the moment, he said he’s still interested in increasing Carlsberg’s stake in Hanoi-based Habeco. Talks with the Vietnamese government have been on for some years now.

“When we’re talking about Habeco we can easily finance that ourselves” using cash flow, the CEO said. “Of course, at the moment rates are low and that makes things easier, but the thing with interests rates is that they can go up as well again.”

To contact the reporter on this story: Christian Wienberg in Copenhagen at cwienberg@bloomberg.net