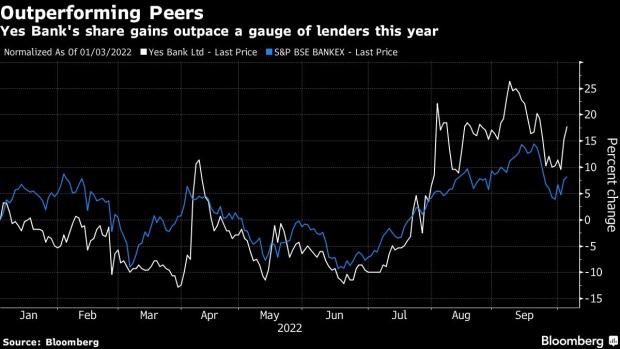 A motorcyclist and passenger travel past a Yes Bank Ltd. branch on a near-empty street in Mumbai, India, on Monday, May 4, 2020. India's central bank Governor Shaktikanta Das and the chief executive officers of the nation's banks have discussed ways to ensure credit flow to businesses once the world's toughest stay-at-home order ends. , Bloomberg

(Bloomberg) -- Yes Bank Ltd., the Indian bank that almost collapsed two years ago from bad loans, is now on a hunt to buy stressed assets from other lenders.

A new partnership with US private-equity firm JC Flowers & Co. LLC allows it to buy soured loans of other banks, Prashant Kumar, chief executive officer of the Mumbai-based lender, said in an interview. The so-called asset reconstruction company, that Yes Bank will take a 19.99% stake in, plans to hire as many as 100 people across legal, compliance and investment management over the next few months, he said.

“We are trying to create a credible platform which has the capability and capacity to buy stressed assets from other banks,” Kumar said, pointing to the bank’s experience in managing this area of the business.

Yes Bank agreed to sell 480 billion rupees ($5.9 billion) of a bad loan portfolio last month to JC Flowers’ ARC, a move Kumar said will help boost its profitability. The sale is a major step by the bank toward shedding the mountain of stressed loans that led to its shock rescue by India’s central bank in March 2020. The bank remained heavily saddled with bad loans even as it returned to posting quarterly profits.

While the soured-debt ratio at India’s lenders has now fallen to a six-year low, the country held the dubious distinction of having the worst non-performing loan ratio among the world’s major economies till two years back.

Kumar said most overseas buyers of stressed assets haven’t been successful in India because they did not have the right local partners or lacked scale. JC Flowers’ experience in managing stressed assets will help in creating a credible platform for the bank, and positions the ARC to become the largest of its kind in the country, he said.

Through its funds, JC Flowers invests across the financial services industry. This includes distressed companies, which it seeks to turn around by cleaning up their balance sheets and operations, or selling parts of the business to other investors or firms.

“The bank is not yet out of the woods and it is a high-risk stock,” said Kranthi Bathini, a strategist at Mumbai-based Wealthmills Securities Pvt. Ltd., referring to the bank’s progress so far and its growth strategy. Still, “its growth of credit and corporate book could move the needle for large institutional investors to invest in the stock.”

Besides the JC Flowers deal, Kumar is also upbeat about the new shareholders in the bank. US private equity giants Carlyle Group Inc. and Advent International Corp. announced in July their purchase of a 10% stake each, and Kumar said their $1.1 billion of fresh capital commitment is the “biggest validation” of Yes Bank’s turnaround prospects.

Under Kumar, the bank has made several changes to its lending portfolio. It no longer has large exposures to any one corporate borrower, and has also focused on growing its retail offerings, such as personal, home and vehicle loans, he said.

The Reserve Bank of India on Thursday gave an extension of three years to Kumar to remain as chief executive. The bank’s first quarter net income had risen to 3.11 billion rupees.

Yes Bank can also provide solutions despite being small, Kumar said, pointing out it is the only private Indian bank to open a rupee account for trade with Russia. Once clients start using the account to settle trades, it will add some float to its balance sheet, Kumar said, though he declined to comment on expected transaction volumes.

He is confident that the bank’s big shareholders, like State Bank of India, will not withdraw support after a lock-up on holding its shares ends in March next year. Yes Bank’s shares have risen more than 20% this year, outperforming the 10-member S&P BSE Bankex Index.

“When you see an investment growing, nobody withdraws,” Kumar said. “Institutional investors remain committed to the bank as they know there are no negative surprises in the offing anymore.”